Mysuru: The century-old University of Mysore at one time boasted one of the highest strength of foreign students studying in the University. However, from a strength of as high as 1,300 to 1,400 ten years ago (2008) from nearly 65 countries, the numbers have come down to just 765 this year. The reason is the entrance test introduced in 2014 which led to drastic reduction in admissions.

The foreign students had to write an entrance test before seeking admissions for PG courses. The test would be held in June and it would be difficult for them to write the test as they could not get visas on time. After writing the test and getting the study certificate by July end or August, the classes would have already commenced and the foreign students would face attendance shortage.

“This led to many students leaving the course in the first semester itself. Hence, we decided that we will cancel the entrance test for foreign students,” said Prof. H.R. Janardhana, Director, International Centre, speaking to Star of Mysore.

Instead, an Equivalent Committee has been set up where all the Deans of Faculty including the Vice-Chancellor will declare the eligibility for students as early as February. A provisional admission is made and then the students will report to the Admission Committee in the respective Departments where they have got admissions with their original visa, marks card and they will be given provisional admission in the month of May or June itself.

“Thus the students can start attending the classes from the beginning of the academic year and write the first semester exam in December. However, it must also be stressed that there is no entrance test for Undergraduate students,” he said.

Once the entrance test is done away with, the foreign students with this new admission process can apply in advance without any hassles. “This was what was happening earlier and that was the reason why there were so many foreign students in our University in the past,” said Prof. Janardhana.

The foreign students are all admitted under the ‘B’ scheme which is payment seat and this generated funds for the University. However, the declining numbers has been a cause for concern, he added.

“The reason why foreign students want to study in our University is because of the standards of teaching and research and this is exactly what the Committee which made a presentation in Delhi for Institution of Eminence status told the University Grants Commission (UGC). If we get the status, our University will get Rs.1,000 crore grant,” he said.

The University has a tie-up with Indian Council for Cultural Relations (ICCR) and from here every year nearly 300 students from SAARC and other third world countries are admitted and they do not have to write any entrance test.

“This year nearly 400 students have become ‘eligible’ to seek admissions and hopefully the number will go up to 1,100 – 1,300 including the nearly 765 foreign students from 65 countries already studying here,” said Prof. Janardhana.

Each Professor can guide eight students out of whom two are foreign students. Since there is only 20 per cent permanent faculty in the University and the Guest Faculty cannot be guides, the only solution is to appoint at least 300 faculty for various Departments immediately, opined Prof. Janardhana.

The foreign students selected by ICCR, who come on scholarships from now on should compulsorily stay in hostels, according to a direction from Government of India. The reason that has been cited is to see that they do not go wayward. 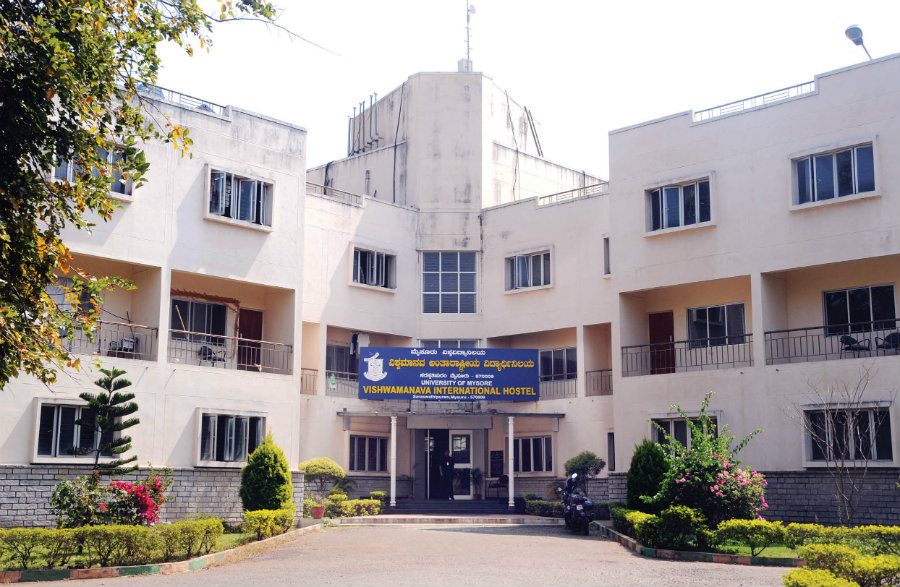 “The foreign students come on fellowships and most of them do get a house rent allowance of Rs.4,500 per month.  But since the new rule has been enforced the students who get scholarships have now to stay in hostels and they have to pay the hostel rent out of the rent allowance they get. We do have Vishwamanava International Students Hostel in Saraswathipuram near the Fire Brigade where the students can be accommodated. Another international hostel has come up in Kuvempunagar on Sahukar Chennaiah Road, where the NSS Hostel of University of Mysore is also located,” Prof. H.R. Janardhana, Director, International Centre,  said.

The main problem for foreign students is the food and hence a centralised kitchen is provided where they can cook their own food. Nearly 100 students can be accommodated in these two hostels. The remaining 200 students who study in other colleges like Vidyavardhaka and JSS Law College and a few others have hostel accommodation facilities, he added.