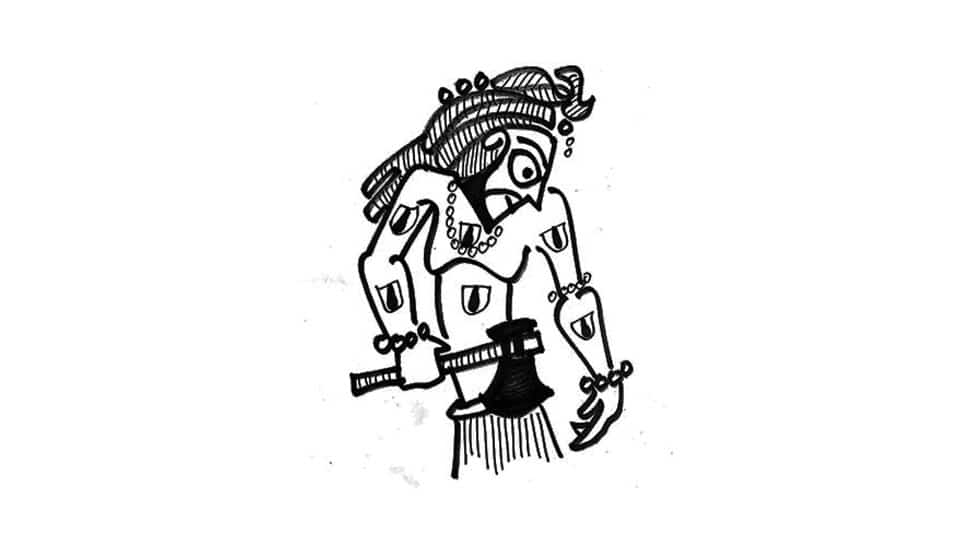 Parasurama is the sixth avatar of Vishnu, also one of the most controversial ones. This is why we do not see many temples dedicated to him. If we do, we find them along the Konkan coast and Karnataka, as a subsidiary shrine, in temples related to his mother, Renuka. There are two reasons for his controversial nature.

The first is his relationship with his mother. The story goes that Jamadagni had married Princess Renuka and she had borne him five sons. One day, she saw the reflection of a Gandharva on the waters while collecting water from a river. Some say, it was a king called Kartavirya Arjuna. She experienced desire for him momentarily. As a result, she lost her magical power, resulting from chastity and fidelity, to collect water in unbaked pots.

When her husband realised the momentary lapse in her fidelity, he ordered that she be beheaded. Even though she had never acted on the fleeting thought, he refused to forgive her. The elder four sons refused to obey their father. So, they were cursed to become eunuchs. The youngest son, Parasurama, obeyed his father. He raised his axe and beheaded his mother. He then asked his father to resurrect her using his magical powers.

He filled five lakes with their blood. For this act of violence, he thus became the lord of all of the Aryan lands. He gave away these lands to the brahmins. Then, he threw his axe into the sea, which recoiled in horror, to reveal the land which is the Konkan coast in Kerala.

We are told that Parasurama was ostracised by the brahmin community. He decided to create warrior monks using his powers in these coastal lands, who would fight unrighteous kings. It is said that no brahmin was willing to follow Parasurama. So, he resurrected dead brahmins. Since they were resurrected and purified (pavan) from the funeral pyre (chita), they came to be known as Chitpavan brahmins, who played a key role in the building of the Maratha Empire.

Parasurama taught martial arts to the Nairs of Kerala. And, as per some Rajputs, he performed “havan” and from fire gave birth to Agnikula Rajputs, the fireborn royal sons, replacing earlier Kshatriya order.

Across India, Hindutva has raised gigantic muscular images of Parasurama wielding an axe, the same axe that was used to behead both Renuka and Kartarvirya Arjuna — perhaps warning women and men not to break their alignment with the Hindutva moral code.

Parasurama’s violence is valorised as good violence, dharmic himsa. Ironically, what is left unsaid, is that the students of Parasurama —Bhisma, Drona and Karna — were all seen as adharmic by Krishna, the eighth avatar of Vishnu, and were killed for displaying loyalty to Kauravas who refused to share wealth with the Pandavas.

READ ALSO  What came first: The world or life?