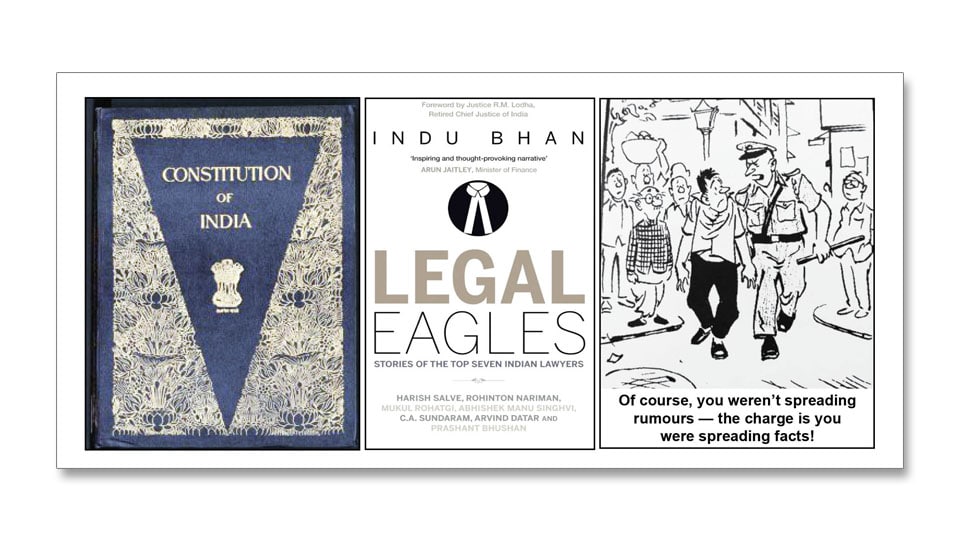 In my recent memory, no arrest of a journalist had roused as much disturbing feelings as when Arnab Goswami, the Chief of the Republic TV, was arrested on Nov. 4, 2020. For me, as a student of law and a journalist, it was most intriguing because he was NOT arrested for reasons of any violation of law relating to journalism.

In the beginning I thought, while randomly scrolling the TV channels, that he was arrested for making allegations against the Maharashtra Chief Minister Uddhav Thackeray and for addressing Sonia Gandhi and the Congress Party in his own style, by the Maharashtra Police, considering it as defamatory under the IPC or some other related criminal law. But it was not so.

He was arrested, along with two other persons, in connection with a case of “abetment to commit suicide” based on their names being mentioned in a suicide note of a person who had executed some interior design work etc., for these three persons and allegedly    the bill was not settled fully.  The case was closed by the Police after enquiry in the year 2018. Let it be.

The nitty-gritty of legal procedures in the Chief Judicial Magistrate’s (CJM) Court and the next higher Sessions Court and the High Court of Bombay is now in the public knowledge. It took eight days and an advocate of international stature Harish Salve to get him bail from the Supreme Court of India and free Arnab Goswami and the other two accused persons.

After he was freed under bail, as expected there was much sound and furry signifying not “nothing”, as Shakespeare would say, but exposing many weak links in our criminal law. It was obvious there were many loopholes in the law. The power to enforce the law by Prosecuting authority (the State) and, more importantly, the discretionary power of the Judges to interpret the law according to their own wisdom, understanding or concern need to be reviewed in a Free country.

Knowing Arnab Goswami, by looking at his theatrics on the TV channel and also aggressive nature, he was not the one to miss the opportunity to declare his victory to the world (of his TV viewers) in as dramatic and loud a manner as was possible. At the end of it all I was wondering whether the issue before the Court was about the alleged “abetment to commit suicide” case or the question of Freedom of the Press. This because, I read and also heard (on TV) about the question of Freedom of Press being discussed.

Of course, it would be interesting to know the march of law with regard to the re-opened criminal case in the CJM’s Court. Let us look forward for another legal battle and await the result — whether the State Power will win or the accused. That probably would be the second round of this war of attrition between the State of  Maharashtra and Arnab Goswami, of course, along with other two accused.

Be that as it may, why are we in this kind of anomalous, grey, incomprehensible and highly elastic legal conundrum which is the main cause for flooding of cases in Courts and even at official levels leading to inordinate delay in delivering justice? No citizen of this free country today is happy with our legal system because of its cobweb-like complexity.

READ ALSO  Tomorrow: A Day of Destiny for Karnataka

I guess Mahatma Gandhi got us freedom from the British rule hoping that the political freedom from British would further the cause of giving our people all other collateral freedom that our people should get — and for this very reason the Founding Fathers of our Constitution enshrined the most, I repeat, the most important Article 19 in our Constitution. Now what are those Rights to Freedom? The Article enumerates what rights all citizens of our country shall have. They are:

a) The Freedom of Speech and Expression.

b) Freedom to assemble peaceably and without arms.

d) Freedom to move freely throughout the territory of India.

e) Freedom to reside and  settle in any part of the territory of India.

f) *[Originally it was about the freedom to acquire hold and dispose of property etc., but it was omitted, I think, by an amendment Act 1978.]

g) Freedom to practice any profession or to carry on any occupation.

However, these freedoms are qualified to come with a caveat as mentioned thereon. Probably that is the reason why Kashmir which had a special status was integrated with the rest of India by abrogating  Article 370.

I was just wondering why we were not able to have the Right to Freedom, given to us under Article 19, absolutely and in its totality. Well, my dear readers, just two days back while reading an interesting book about a political leader of our country I got the answer. Let me just quote the paragraph and be done with my rambling thoughts.

READ ALSO  Of mice and men

A widely read western paper went so far as to argue in its editorial that the electoral verdict of 2014 “May well go down in history as the day when Britishers left India.” It was observed Narendra Modi’s victory in the elections mark the end of a long era in which the structures of power did not differ greatly from those through which Britain ruled the sub-continent. India under the Congress Party was in many ways a continuation of British Raj by other means.”

“The editorial spoke of the voices of the people asserting itself, a people who had a vote but often lacked a voice. Which was seen as an endorsement of that voice; he was a “new kind of leader from ‘lower castes’, not a natural English speaker without any truck with old power structure and elites.”

Now the question is: How do we get over the British hangover completely and restore the power and value of Article 19 (Right to Freedom) as was conceived when the Constitution was first framed?

Recently I came to know of a book “Legal Eagles – Stories of The Top Seven Indian Lawyers.” Time, a Committee of such lawyers and other intellectuals be formed to study and make suggestions to reform our legal system, laws and restore the power and glory of Article 19 of our Constitution, so that the dream of Mahatma Gandhi as mentioned earlier may be realised at least from now on as a truly “Free India.” Some hope.

ABRACADABRA Arnab Goswami K.B. Ganapathy
Axe of Parasurama
What Mistakes Should be avoided by the Bitcoin Buyers?

3 COMMENTS ON THIS POST To “Rambling thoughts on Arnab Goswami’s arrest, release and our legal system”