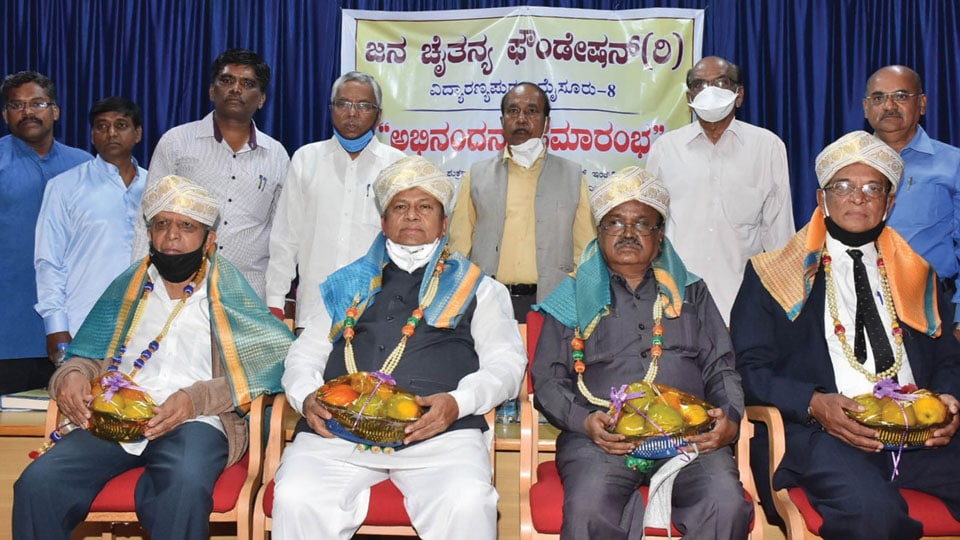 Mysore/Mysuru: A B.Com graduate is working as Safai Karmachari in Bruhat Bengaluru Mahanagara Palike (BBMP) and a TCH trained girl is doing the job of Pourakarmika atop Chamundi Hill. This was disclosed by none other than Karnataka State Safai Karmacharis Commission Chairman M. Shivanna.

He was speaking at a felicitation function organised by Jana Chaitanya Foundation at the Institution of Engineers-India (IEI) here on Friday.

Shivanna said it was a matter of concern that the children of Safai Karmacharis were not getting the Government jobs even seven decades after independence. The sad part was that many educated persons were working as Pourakarmikas just because they are Government jobs. “Recently, I had been to BBMP for inspection. At that time, I came across a Safai Karmachari lady saying thank you to her friend over a mobile phone. Out of curiosity, I spoke to her and was shocked when she told that she is a B.Com graduate. I questioned myself that in which system we are living as the children of Safai Karmacharis are not getting the Government job.”

He said during his visit to Chamundi Hill, he came across another Pourakarmika who had finished her TCH training. She chose this job as she could not get teacher job in Education Department. Still there are many graduates and double graduates who are working as Pourakarmikas for job security. However, they were not seen in the eyes of society, he said.

Despite the world witnessing new technological innovations, the system of carrying night soil on head was still prevailing in the country. It was still in practice despite the State Government passing an order banning this long ago. The previous Chairman of the Commission, Narayana, had done a wonderful job and all pending works would be completed. Problems of the Commission would be discussed with Chief Minister B.S. Yediyurappa for solution, he added.