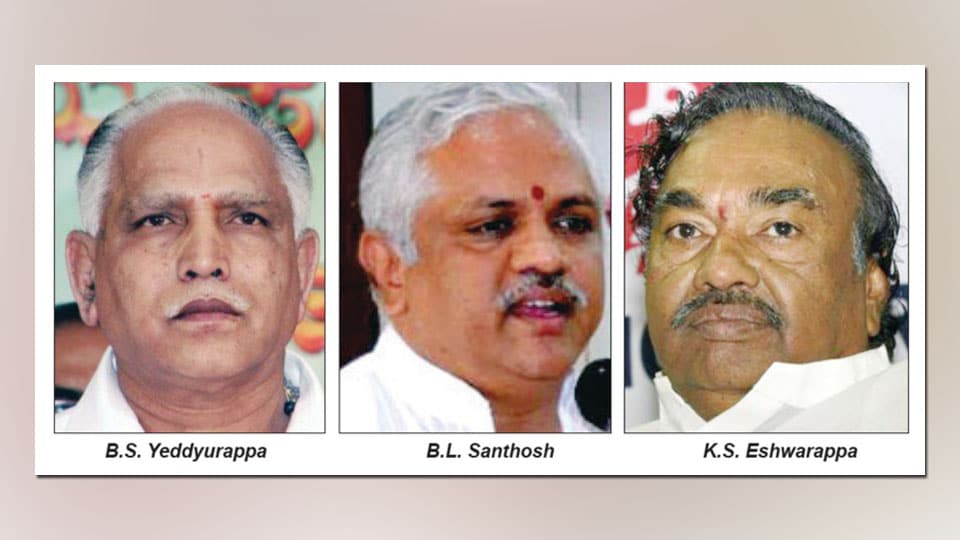 Is B.L. Santosh making attempts to make most of BSY- Eshwarappa rift?

Bengaluru: BJP National Joint Organising Secretary B.L. Santosh, who has been the centre of target by the Yeddyurappa faction, who accuse him to be behind K.S. Eshwarappa’s rebellion, is said to be attempting to make the most out of the rift between B.S. Yeddyurappa (BSY) and Eshwarappa, according to some sources in the BJP.

Santosh, who has seen the recent political developments in Uttar Pradesh, Maharashtra and Goa closely, is learnt to be making efforts to reap personal benefits out of the factional politics in the State BJP. Santosh, a native of Hiyadka in Udupi district, is a Mechanical Engineering Degree holder. Santosh, who is a bachelor, has been a long-time active RSS activist and climbed up the organisational ladder through his organisational skills.

Santosh, who was close to Yeddyurappa in the beginning, later became disappointed with BSY as he began to defy his directions and even made a failed attempt to gain control over Yeddyurappa at one point.

But Santosh gained an upper hand in the party when Yeddyurappa suffered a series of setbacks in Courts over corruption against him (BSY).

Now that Yeddyurappa is back as the State BJP Chief and has been declared as the CM candidate, Santosh is said to be back at his behind-the-scene acts, inciting rebellion within the party against BSY, it is said.

On his part, Yeddyurappa has been continuously targeting Santosh, accusing him of being behind K.S. Eshwarappa’s rebellion.