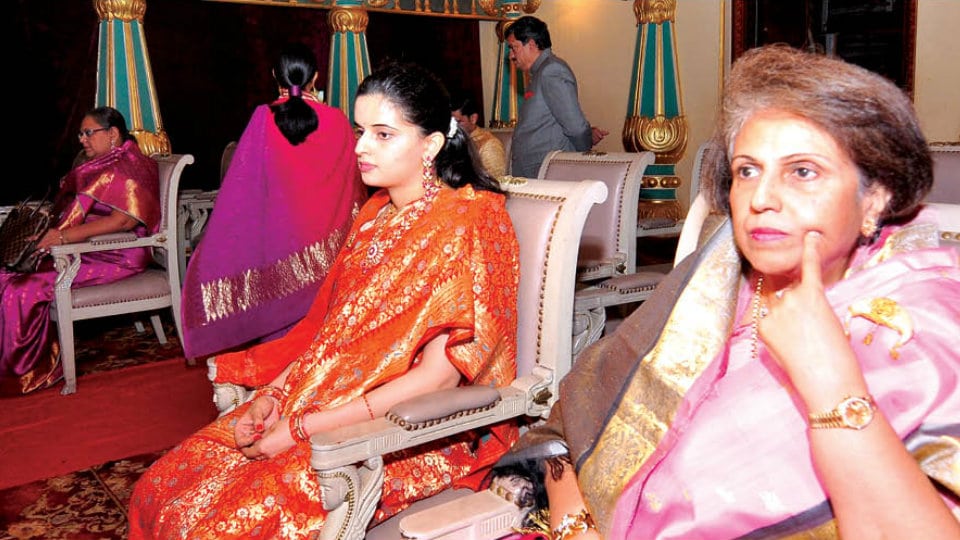 Mysuru: There was a sense of joy and happiness all over the Mysore Palace this morning as the royal family performed ‘Seemantha Shastra’ (baby showers ceremony) on Trishikha Kumari Wadiyar, who is expecting a child.

It was a private ceremony where only a few invitees including the members of Mysore Royal Family, Dungarpur Royal Family, Yaduveer’s biological parents Swarup Anand Gopal Raj Urs and Tripurasundari Devi, representatives of Parakala Mutt and Palace Priests and other guests participated.

Senior women members of the family performed a few rituals including ‘Madlakki Shastra,’ praying for the well-being of both mother and the child. The Palace Priests also chanted Vedic hymns to wish mother and child prosperity and health.

Today’s baby shower ceremony is indeed special because the previous king Srikantadatta Narasimharaja Wadiyar did not have children. After the death of the king Srikantadatta Wadiyar, his wife Pramoda Devi adopted Yaduveer as her son and thus the titular head of Mysuru kingdom.

Born as Yaduveer Gopal Raj, he is the only son of Swarup Anand Gopal Raj, and his wife, Tripurasundari Devi, the niece of the late Maharaja Srikantadatta Narasimharaja Wadiyar married the princess of Dungarpur Palace in Rajasthan, Trishikha Kumari on June 27, last year.

For 400 years, the alternate Mysuru Maharajas have not had children. It is said that a woman from an influential background had cursed the Mysuru kingdom’s ancestor that no Mysuru king will have a child. Accordingly, so far only the adopted sons have had children.