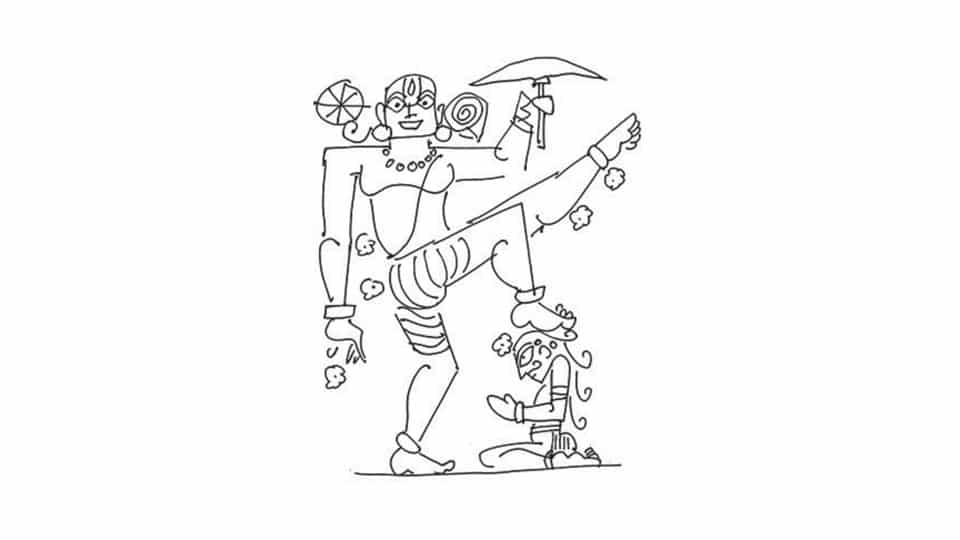 A few months ago, there was a war going on in Kerala about whether Onam has to be celebrated as the annual return during harvest of Maha-bali, the asura-king, from Pa-tala, his subterranean realm or as Vaman Jayanti, the triumph of Vishnu’s dwarf avatar, Vaman over Bali. But, very few commented on the fact that unlike Kerala, in the rest of India, Bali’s return is celebrated on the first day of the waxing moon, known as Bali Pratipada, the fourth day of Diwali, following the new moon night when Lakshmi is venerated.

According to Vishnu Purana, there was a great asura-king called Maha-bali during whose rule everyone was so happy that they felt no need to invoke the devas during yagnas. In fact, no one died, and so Yama, god of death was worried. So, the devas went to their father Brahma who took them to Vishnu who promised to find a way to get rid of the wonderful Maha-bali. Since Maha-bali could not be defeated in war, Vishnu decided to defeat him taking advantage of his generosity, for Maha-bali had declared he would give whosoever approached him, whatsoever they asked for. Vishnu, in the form of a dwarf or Vaman, asked for three paces of land. Maha-bali gave it.

At that moment, Vaman took the form of a giant, and with two paces covered the earth and the sky, and in a booming voice asked Maha-bali that there was no place for him to place his foot after the third pace.

Maha-bali, overwhelmed by this magnificent sight, bowed down and asked Vaman to place his foot on his head. Vaman did so and shoved Maha-bali under the earth. Impressed by Maha-bali’s nature, Vishnu asked him for a boon, and Maha-bali asked Vishnu to serve as his doorkeeper in Pa-tala. Vishnu agreed and declared that once a year, Maha-bali would return to earth, and with him would come great harvest and prosperity.

From a mythological point of view, the story is very complex, containing layers and layers of thought, spread over 3,000 years, from the Vedic Vishnu, who takes three paces to measure space and time, to the Puranic conflict between devas and asuras, Lakshmi’s primeval association with subterranean creatures — including nagas, asuras and yakshas — to the Brahminical need to turn every avatar of Vishnu into a privileged brahmin, who brings good luck to all those who respect and take care of him, to the historical spread of Brahminism from North India to South India, and the role Brahmins played in legitimising kingship in exchange for land-grants, to the rise of caste hierarchy in India, to the discomfort with charity in some Hindu philosophies (charitable characters are demons or anti-heroes who invariably suffer).

However, in the 19th century, the British transformed this complex myth into self-serving historical narrative, an approach that greatly appeals ironically to ‘rational’, ‘secular’ and even ‘atheist’ Right- and Left-leaning politicians. Right-leaning politicians see the story as indicating the historical spread of dharma across India, and the defeat of immoral and unethical ‘demons.’ Left-leaning politicians see the story as a story of Aryan invasion of white brahmins who overpowered and enslaved black people and made them dalit. When ideology blinds us, we turn to mythology, subjective truth of communities about the human condition, into history, which is more often than not a political truth.