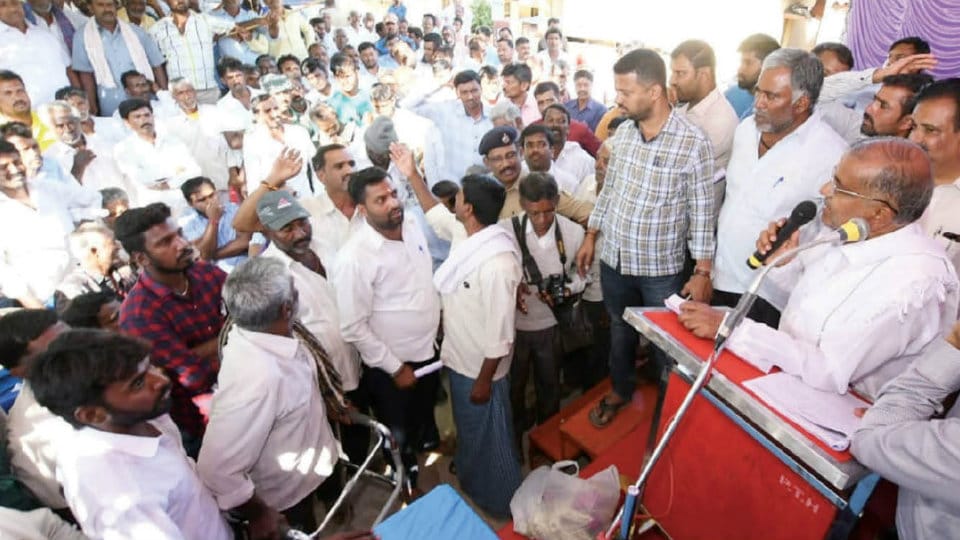 It has been over six years  that Mysuru Urban Development Authority (MUDA) decided to develop a layout at Ballahalli next to RT Nagar. But the project has been pending because farmers are opposed to parting with their land. The MUDA’s dream project was conceived in 2012 and entailed developing a self-sufficient satellite township, which could ease the pressure of development and urbanisation in Mysuru.

When the project was proposed, it was first in Karnataka where in a farmer would get developed sites in return for land at 50:50 ratio. To partner with land losers, MUDA, which wants to acquire 431 acres for the layout, proposed the 50:50 formula.

As the meeting began, MUDA Commissioner Kantharaju said that land owners would get a 50:50 share in developed sites. Also, Rs. 5 lakh per acre will be given to families as maintenance for a year and fully developed sites will be handed over to the land losers the next  year, he said and added that the Government accorded permission in 2015, following which the primary notification for acquisition of land was issued in 2016.

Even as the MUDA Commissioner said this, a few farmers claimed that they have been kept in the dark over the layout. But MUDA officials countered them, when locals went near the dais and started arguing.

READ ALSO  Provisional list of R.T. Nagar site allottees to be announced in a week

A visibly upset Devegowda hit out at MUDA officials and asked them why he was invited to attend the meeting without resolving the issues pertaining to land acquisition.

The Minister admonished MUDA Commissioner Kantharaju for inviting him for the meeting without ironing out the differences with the farmers. Devegowda also lashed out at the local residents saying that their behaviour diminished the dignity of their village. He then threw the microphone, walked out of the stage and left the village in a huff.

With this, the satellite township project for which the MUDA proposes to acquire 431 acres of land, has received a setback and may not be revived in the immediate future.

The project entailed land acquisition to an extent of 500 acres in the initial stages, which was subsequently curtailed to 431 acres. This was supposed to be the first project under the 50:50 scheme.

But Friday’s chaotic meeting underscored the fact that the farmers were not ready to part with their land.