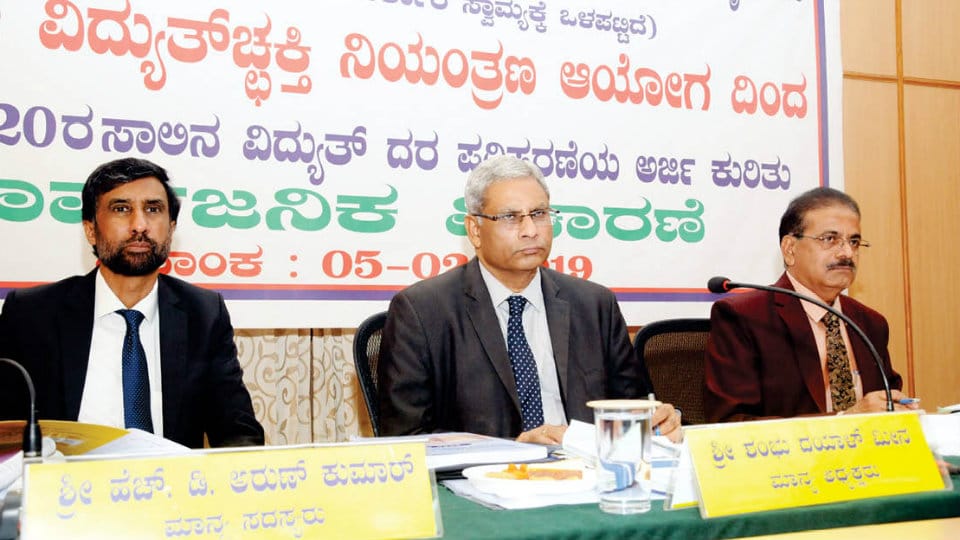 At a public hearing organised by KERC at the Court Hall of the Deputy Commissioner’s Office, they demanded the KERC to dismiss the Chamundeshwari Electricity Supply Corporation (CESC) appeal to hike the power tariff across all slabs power consumers for the financial year 2019-2020.

The public hearing was held as per the procedure every year after receiving proposal from Electricity Supply Companies (ESComs) for a revision of tariff and objections for the same from the power consumers.

Today’s hearing was for consumers of CESC region comprising Mysuru, Mandya, Chamarajanagar, Hassan and Kodagu.  KERC will send a proposal to the State Government with its recommendations after completing all the public hearing.

He defended that its power tariff increase demand of 99.56 paise per unit across all slabs of power consumers will help CESC to overcome the losses and streamline distribution network.

Gopalarkishna claimed that CESC had provided electricity connections to all villages including tribal hamlets, remote areas, covered all the tasked electrification works besides ensuring quality power supply to its consumers.

READ ALSO  Can your electric connection be cut without a notice?

Responding to the presentation made by the CESC MD, President of Mysore Industries Association (MIA) and former MLA Vasu took strong objections against the CESC appeal of increasing the power traffic.

He urged the KERC not to yield to CESC demands and retain the existing tariff structures in the larger interest of power consumers, who were already jolted by the implementation of GST, demonetisation of higher currency notes and other maintenance cost.

MIA Gen. Secretary Suresh Kumar Jain too opposed the power tariff revision. CESC has failed to improve the efficiency of its operation by implementing the directives issued by the Commission since 2001; the hike in tariffs sought by the applicant is not justified. Industries are suffering due to frequent load-shedding and there is a need for independent feeders for the industries.

He alleged that CESC has been running under loss because of its own mismanagement like its inefficiency in collecting power bill due of Rs.1,300 crore from Gram Panchayats, irregular management of street light connections, not taking any action against the unauthorised irrigation pumpsets, power theft, distribution loss and other reasons. CESC should stop burdening the consumers to cover its own inefficiencies and lapses, he added.

“CESC resorts to unscheduled load shedding and this has resulted in severe business losses, there are more than 70,000 small scale industries in CESC division. The then Chief Minister D. Devaraj Urs had developed industries in Mysuru in more than 6,500 acres of land, former CM Siddaramiah has also contributed a lot for development of Nanjangud Industrial Area at 3,000 acres of land. The Government must reduce the power tariff to save the ailing small scale industries in the region,” he said.

Advisor to MIA Lakshmikanth also appealed to the KERC to levy uniform tariffs during day and night. “CESC must plug pilferage, install new meters instead of burdening the consumers,” he said.

Over 200 objections were filed at the public hearing by the power consumers.