Home » News » Ballahalli Layout: Will GTD’s meeting be a clincher for MUDA ? 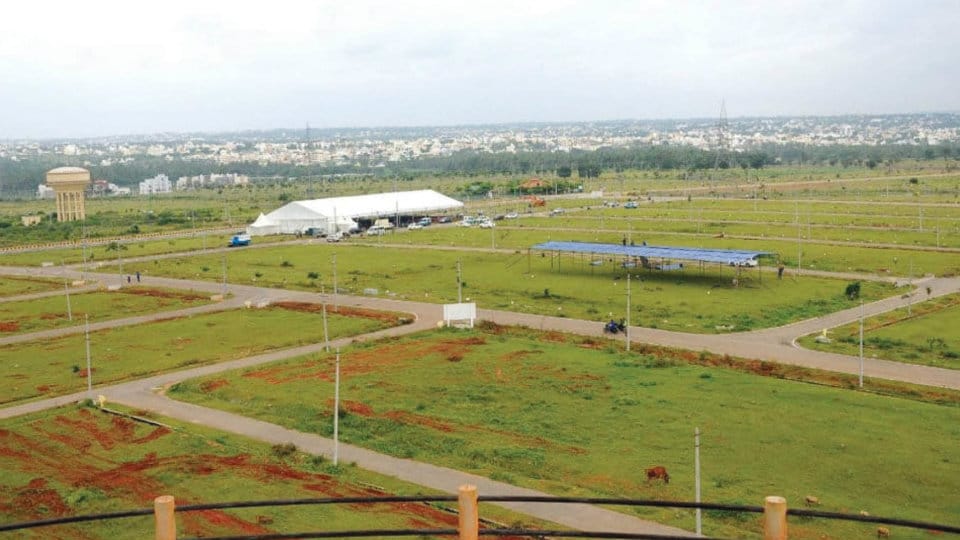 Ballahalli Layout: Will GTD’s meeting be a clincher for MUDA ?

Mysuru: The ambitious and long-pending project of Mysuru Urban Development Authority (MUDA)  to form Ballahalli Layout in partnership with farmers (land owners) is set to move in a right direction with Mysuru District Minister G.T. Devegowda (GTD) chairing a meeting tomorrow between land owners and MUDA to solve the deadlock between them.

The meeting has been convened by MUDA at Ballahalli at 1.30 pm tomorrow (Feb.4) to finalise land acquisition under 50:50 ratio where 50 percent of the developed sites will be given free of cost to land owners or farmers whose lands have been acquired and the remaining 50 percent will be owned by MUDA.

MUDA has appealed to farmers and owners of lands coming under all survey numbers, for which the MUDA has issued primary notification for acquisition, to attend tomorrow’s meeting. One of the stumbling blocks for MUDA at Ballahalli is that the land owners are asking more share in the layouts. Another issue is that the delay in forming the layouts. These issues will prominently figure at the meeting with Minister GTD.

The Ballahalli Layout is near Koorgalli and the MUDA has planned to acquire 484 acres and 28 guntas of land. It is a Rs.258 crore project and the MUDA has plans to develop it within a year if the land acquisition hurdles are cleared. The State Government approved the project on 30.1.2015 and the 50:50 ratio was decided on 11.2.2015.

Prior to this date, the MUDA was following 40:60 ratio where MUDA share was 60 percent and the land owner share was 40 percent. The 50:50 partnership has been worked out by MUDA to avoid litigations and claims of more compensation.

In Ballahalli Layout, MUDA wants to create 6,000 sites and as per the 50:50 ratio, 3,000 developed sites will go to farmers after leaving out space and earmarking roads, drainage, Underground Drainage, power lines, parks, open space, Civic Amenity sites and corner sites.

Already, MUDA authorities have held four meetings with the land owners and 295 land owners have orally agreed to part with the land. These oral consents must be documented in the form of memorandum of understanding (MoU) between MUDA and land owners for the notified land. Once the MoU process is completed, MUDA will begin forming layouts.

Land owners will be at liberty to sell the sites at prevailing market rate once the layouts have been formed. MUDA authorities say that the 50:50 ratio is a win-win situation for both MUDA and the farmers as MUDA will only bear the cost of site development and will not shell out any money towards land acquisition. The financial gain to farmers on sale of site is expected to be higher than the compensation normally paid by the government.

One developed site can easily fetch Rs. 30 to Rs. 40 lakh as it will have full amenities including road, water, underground drainage and electricity connections. Moreover, Ballahalli is located 2.5 kilometres from the Ring Road and the layout will have 100 ft road connectivity. The layout is close to Treasury Layout, Somanatha Layout and the layout constructed by Government Employees Housing Society,  officials said.