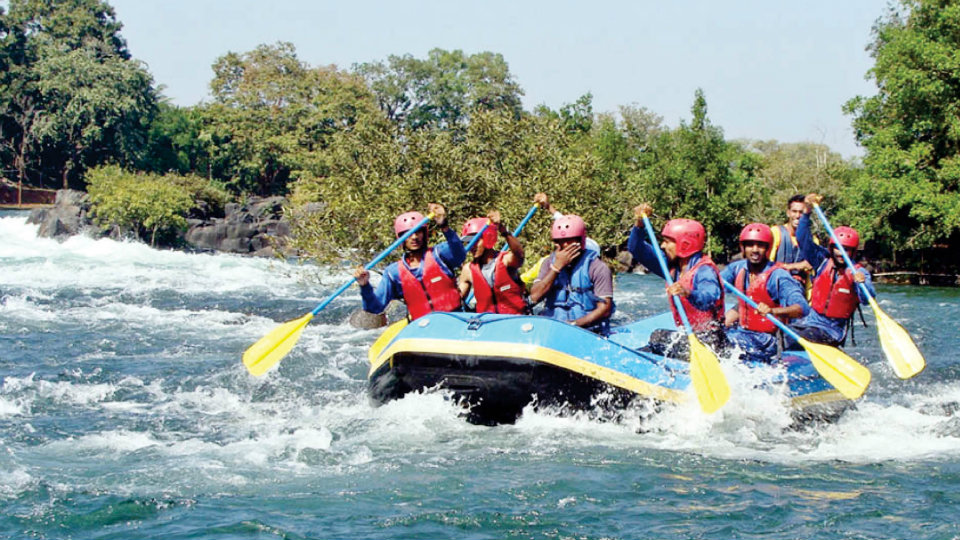 Madikeri: A year after Kodagu District Administration banned White Water River Rafting activity on River Cauvery in Dubare and other rivers, the activity has resumed in full swing. Yesterday, around 10 water rafts were made operational at Dubare following the lifting of the ban by Deputy Commissioner Annies Kanmani Joy.

The rafting activity was officially flagged off by Somwarpet Dy.SP P.K. Muralidhar at a stretch of Cauvery water in Periyapatna. Administration sources told Star of Mysore that the ban was lifted on the instructions from Tourism Minister S.R. Mahesh, who is also the Kodagu District Minister.

While lifting the ban, the DC has put stringent terms and conditions, including strict permissions for the activity. Organisers must ensure safety of tourists during the activity and Departments including Forest and Tourism have been asked to take necessary measures for re-starting river rafting. Rafting charges will not exceed Rs.600 per group, and a total of 48 rafts will be allowed in Dubare area, the DC said in her order.

Each owner has been asked to get a No Objection Certificate (NoC) from a local Panchayat, Fire and Emergency Services Department, Public Works, Ports and Inland Water Transport Department, certificate for raft instructor and also mandatory registration in the Labour Department.

According to the current guidelines, water rafting must start only at one point in Dubare (earlier rafting was being held at multiple points). Only five people have been permitted to operate rafts and each of them can own only two boats. Officials from the Kodagu District Administration will be monitoring the water rafting activities.

Before the ban, water rafting was an all-year programme in Kodagu.

Last July, the then Kodagu Deputy Commissioner P.I. Sreevidya had banned river rafting activity and white water rafting across the district for one month and subsequently extended the rafting ban.

In her order, the DC had stated that there were many adventure organisations and home stays running river rafting activities without permission.

The DC had issued the orders in the wake of several complaints from the tourists and villagers that adventure activity organisers have no expertise in river rafting and some of them are organising such events just to make money. Mandatory safety measures are not being followed by the organisers and lives are at stake, the tourists had complained.

Last February, a tourist from Hyderabad had got into an argument with an organiser of river rafting in Dubare and was killed in the ensuing altercation. It had come to the notice of the District Administration that many organisers of the adventure sport submitted fake documents to the DC and there was a no match between the permission letters and the submitted letter.