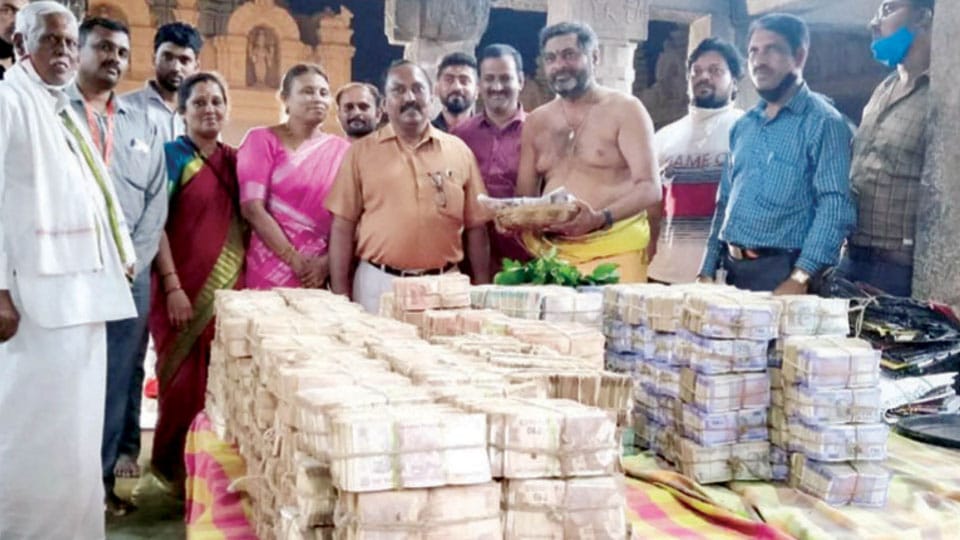 Mysore/Mysuru: Prime Minister Narendra Modi banned the currencies Rs. 500 and Rs.1,000 denomination four years ago. But these ‘out of circulation’ notes are still being dropped into temple ‘Hundi’ (offering box) with hopes of banks exchanging these notes with the valid currency. Staff of Srikanteshwara Temple in Nanjangud was shocked when they found banned currencies worth Rs. 97,000 in Hundi. As many as 12 notes of Rs. 1,000 denomination and 170 notes of Rs. 500 denomination were found.

The offering boxes were opened in the presence of Harsha, Senior Officer, Bank of Baroda and Venkatesh Prasad, Executive Officer, Nanjundeshwara Temple, on Friday. As many as 200 Self Help Group members and 50 temple staff participated in counting.

In October, the temple had received Rs. 73,09,620 as offering and now the collection has gone up to Rs. 1.98 crore, an increase of 250 percent. Nanjangud is famous as ‘Dakshina Kashi’ and lakhs of visitors throng this temple town every year.