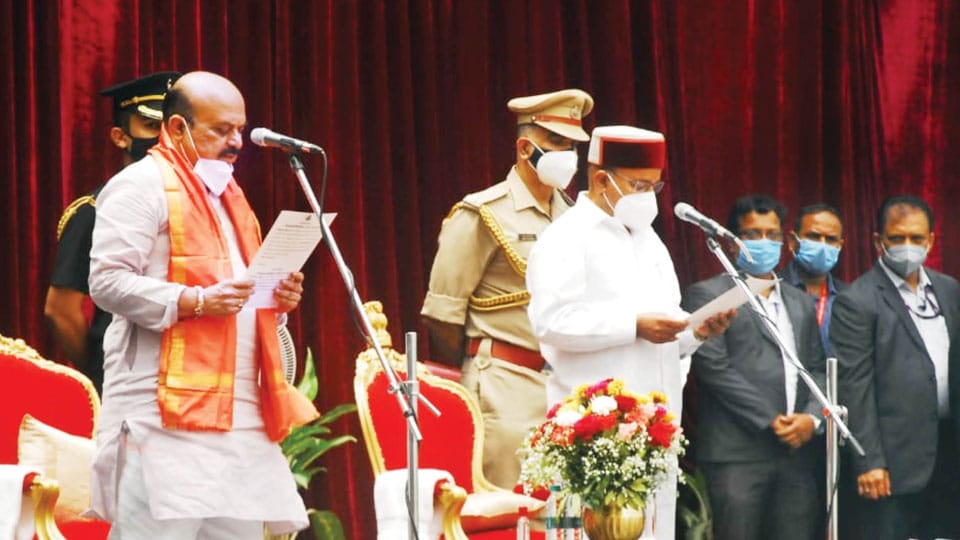 To meet PM Modi this evening; Cabinet expansion likely in a week

Bengaluru: Lingayat leader Basavaraj Bommai took oath as the 30th Chief Minister of Karnataka at 11 am today. Bommai was announced as the new CM at a party meeting at a private hotel in Bengaluru last evening.

Governor Thaawarchand Gehlot administered the oath of office and secrecy to the new CM at a ceremony held at the Glass House of Raj Bhavan here. Bommai, who has no roots in BJP’s ideology, emerged as a dark horse, surprising everyone.

A seasoned and well-read political leader, Bommai maintained a low-profile, seldom making his ambition public. He pledged his loyalties to former CM B.S. Yediyurappa, the formidable political figure of the Lingayat community and his loyalty has now brought him rich dividends.

After being sworn-in, in the presence of Yediyurappa and a host of leaders, Bommai said that floods and COVID-19 are challenges that will be given priority. He said that his Government will work as a team to uplift the poor, farmers and the healthcare system. “I will keep up whatever faith and trust people have in me,” he added.

Basavaraj Bommai later performed puja at Vidhana Soudha before taking over the Chief Minister’s Office. He is scheduled to meet Prime Minister Narendra Modi later this evening. Confirming the same, senior BJP MLA R. Ashok said a special flight has been arranged from Bengaluru to the national capital for Bommai. It might take a week or so for the Yediyurappa loyalist to expand his Cabinet.

Meanwhile, Prime Minister Modi congratulating Basavaraj Bommai tweeted: “Congratulations to Basavaraj Bommai on taking oath as Karnataka’s CM. He brings with him rich legislative and administrative experience. I am confident he will build on the exceptional work done by our Government in the State. Best wishes for a fruitful tenure.”

“No words will ever do justice to the monumental contribution of Yediyurappa towards our party and for Karnataka’s growth. For decades, he toiled hard, travelled across all parts of Karnataka and struck a chord with people. He is admired for his commitment to social welfare,” the PM’s second tweet said.