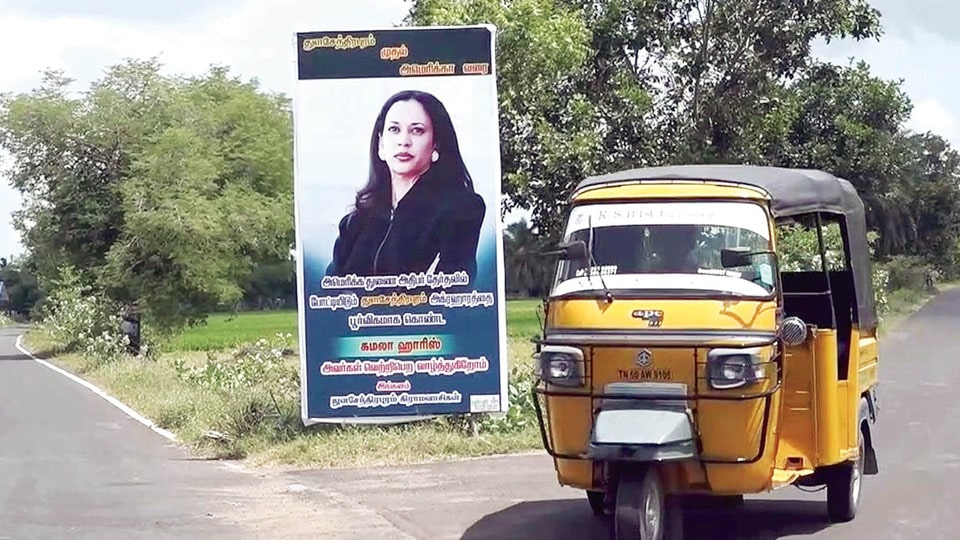 Kamala Harris is the Vice-Presidential candidate pick for the Democratic Party in the United States which is going in for elections in November. And the moment it was announced, as usual we Indians went gaga.

No sooner was Kamala Harris named the Democrats’ VP pick, villagers in Painganadu, Harris’ mother’s village, in Tamil Nadu, put up banners of her. Then priests in Tamil Nadu’s Rameswaram town held special rituals and prayed for Harris’ victory. Ananthapadmanaba Sharma, a priest at the Ramanathaswamy temple said, “We will do all kinds of worship and the Lord will answer our prayers for her victory.”

There was another set of people who became emotional when Kamala Harris  gave a shoutout to her “chithis” while emphasising the importance of family. In Tamil ‘chithi’ means aunt. Soon Americans were googling ‘what is chithi?’ while Tamils were in swoon and some other Indians stated, “Brown people, we’ve officially arrived.”  Well, not really, Kamala Harris is still called the “Black VP candidate.”

What is this obsession we have when someone of Indian origin makes it abroad. Not just people even when a movie about us is made we go obtuse. Remember when Slumdog Millionaire became an international hit and the Indian media called it “India’s Triumph” at Oscars! It was of no consequence to us that Slumdog Millionaire entered Oscars as a British film and was marketed by an American movie house.

Even back then some people performed pujas for Slumdog’s success, which, of course, the TV channels gobbled up and broadcast to the rest of the nation as an issue of national importance.

We Indians have a very bad habit of celebrating the achievements of foreigners of Indian origin. There’s nothing wrong in it but celebrating just because that person happens to have some far-flung connection to India is downright silly and reeks of misguided pride.

We in India take credit for a lot of Indian-Americans’ achievements. In recent memory it started with the movie Salaam Bombay and then came Bend it like Beckham. Then when it came to books it was Vikram Seth and on to television it was CNN’s Dr. Sanjay Gupta. Then a whole lot followed: Amartya Sen, M. Night Shyamalan, Kal Penn. More recently the tech CEOs too were gloated over. But it was Kalpana Chawla and Sunita Williams, both NASA astronauts, who sent the Indian media and its people into a cosmic spin.

Kalpana’s story received a lot of attention but after the tragedy, nothing could stop the media frenzy and prayers when the next woman of Indian origin was ready to board the space shuttle. India went crazy for Sunita Williams. The media began a systematic mental indoctrination to celebrate Sunita Williams’ space odyssey.

There were young Indian girls looking into news cameras and saying, “We are praying for Sunita didi”!? Sunita Williams had become Sunita ‘didi’ in just a matter of weeks. Sunita doesn’t look Indian, she doesn’t speak any Indian language, she is not married to an Indian, she had never visited India before, yet we so easily made her our beloved ‘didi’. If anything, Sunita Williams is a caucasian, all-American gal! Poor Rakesh Sharma, our very own astronaut, was never referred to as ‘Rakesh mama.’

The other person who took a lot of our time was Bobby Jindal, the once young and promising Republican Governor of Louisiana, United States of America. To begin with, he is American, he says he is pure red, white and blue laced with, of course, a little brown. But our ‘Bobby bhaiya’ never really wanted to be associated with India.

According to reports, he gave himself the name ‘Bobby’ before his real name ‘Piyush’ after an American television character! In high school, he converted from Hinduism to Christianity. It seems like he did all this just so he would fit into the American culture. For it must have been hard for a brown boy growing up in conservative Louisiana with a name like ‘Piyush’ that a red-neck could pronounce only as ‘piss.’

But funnily enough ‘Bobby bhaiya’ did something very Indian — had  an arranged marriage.

When Satya Nadella became the CEO of Microsoft, the media sent our minds crashing like a Windows Operating System, with cringey Nadella stories. Nadella’s sixth standard teacher too got his 15-minute as he said, “Nadella loved Maths and was always into IT.” What?! In 6th standard? Where was IT in 1980! Then came the typical yardstick for a ‘good student’ as the teacher said, “He always sat in 2nd or 3rd row.” Oh masterji please!

We take a lot of credit for what America has been able to do with ‘our’ people. While we kill curiosity in our students, they nurture it. While we crush talent in the name of quota system, they welcome it with scholarships. While we see genius only in the first two rows, they look for talent in every inch of their classrooms. And today, without having done anything to create an ecosystem for innovation, retention of talent or nurturing it, we have the arrogance and audacity to hijack the efforts of USA’s vision designed for innovation and success.

It’s time to shine on our own and the only way to do it is by providing support systems that will enhance knowledge, nourish curiosity, nurture talent and facilitate entrepreneurship. Polish it well with moral character and soon we will shine forth bright and glorious and then we can celebrate, for it will be ours, truly ours, truly Indian. 100% desi. 100% swadeshi. Enough of this basking in reflected glory.

9 COMMENTS ON THIS POST To “Basking in Reflected Glory”