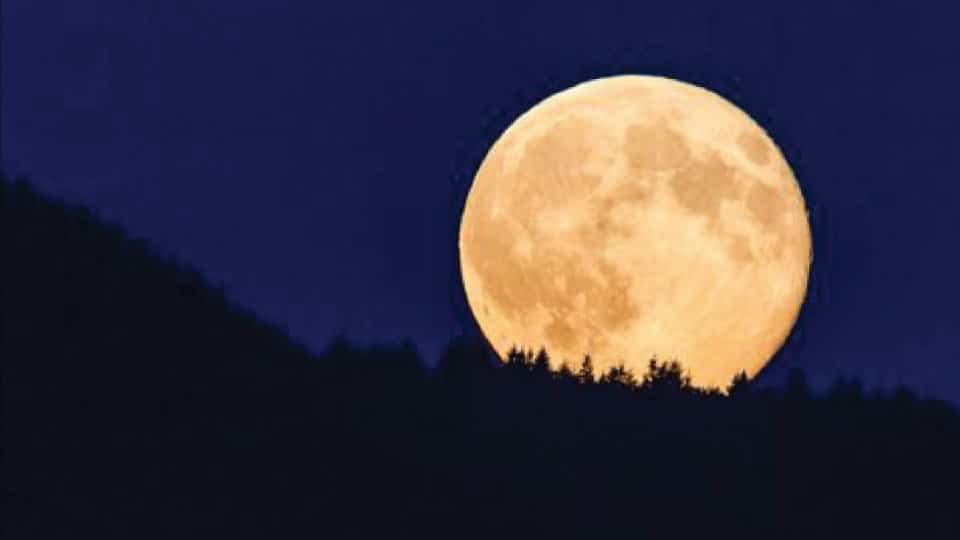 Tonight (Feb.9), Indians will be privileged to witness the spectacular, resplendent, and first Supermoon of this year. This is known as lunar perigee and a normal lunar perigee averaging a distance of 3,62,479 kilometres happens once every orbital period. This event can be referred as “Supermoon.”

The term “Supermoon” was coined by the astrologer Richard Nolle. He generally describes Supermoon as perigee-syzygy — a new or full Moon (syzygy) which occurs with the Moon at or near (within 90%) its closest approach to Earth (perigee) in a given orbit. In short, Earth, Moon and Sun are all in a line, with Moon in its nearest approach to Earth.

The Supermoon occurred in 1955, 1974, 1992, 2005, 2011, 2016 and 2018 were amazing. It is a scientific fact that when the Moon is at perigee there is more gravitational pull, creating higher tides or significant variations in high and low tides. In addition, the tidal effect of the Sun’s gravitational field increases the Moon’s orbital eccentricity when the orbit’s major axis is aligned with the Sun-Earth vector. The average tidal bulge closely follows the Moon in its orbit, and the Earth rotates under this tidal bulge in just over a day. However, the rotation drags the position of the tidal bulge ahead of the position directly under the Moon. Generally Tidal forces contribute to ocean currents, which moderate global temperatures by transporting heat energy toward the poles. It has been suggested that in addition to other factors, harmonic beat variations in tidal forcing may contribute to climate changes.

From extreme coastal tides to severe storms to powerful earthquakes and volcanic eruptions, the entire natural world surges and spasms under the sway of the Supermoon alignment — within three days either way of the exact syzygy, as a general rule. The geocosmic risk raised by Supermoon alignments will pass with little notice in our immediate vicinity. A Supermoon is planetary in scale, being a special alignment of Earth, Sun and Moon. It’s likewise planetary in scope, in the sense that there’s no place on Earth not subject to the tidal force of the perigee-syzygy. The effects on Earth from a Supermoon are minor, and according to the most detailed studies by terrestrial seismologists and volcanologists, the combination of the Moon being at its closest to Earth in its orbit, and being in its ‘Full Moon’ configuration (relative to the Earth and sun), should not affect the internal energy balance of the Earth since there are lunar tides every day.

The Earth has stored a tremendous amount of internal energy within its thin outer shell or crust, and the small differences in the tidal forces exerted by the Moon (and sun) are not enough to fundamentally overcome the much larger forces within the planet due to convection and other aspects of the internal energy balance that drives plate tectonics. ‘Supermoon’ is a situation when the Moon is slightly closer to Earth in its orbit than on average, and this effect is most noticeable when it occurs at the same time as a Full Moon. So, the Moon may seem bigger although the difference in its distance from Earth is only a few percent at such times.

It is called a Supermoon because this is a very noticeable alignment that at first glance would seem to have an effect. The ‘super’ in Supermoon is really just the appearance of being closer, but unless we measure the Earth-Moon distance by laser range-finders, the LRO [Lunar Reconnaissance Orbiter] spacecraft in low lunar orbit and to watch the Earth-Moon distance over years, there is really no difference. The Supermoon really attests to the wonderful new wealth of data NASA’s LRO mission has returned for the Moon.

Astronomers have estimated that, the Supermoon will be around 15 percent brighter and 30 percent bigger than the average Full Moon. Full Moons from the way we see it, vary in size because of the oval orbit of the Moon. It is an ellipse with one side (perigee) about 50,000 km closer to Earth than the other (apogee). Experts say the short distance difference isn’t enough to cause any earthquakes or tidal effects. The Earth’s tides are expected to be particularly high and low when the Moon comes closest to our planet which is known as perigean tides. That’s when the Moon exerts about 42 percent more tidal force than it will during its next cycle two weeks later. In most places, lunar gravity at perigee pulls tide waters an inch or so higher than the usual tide.

To view this weekend’s Supermoon to best effect, look for it just after it rises or before it sets, when it is close to the horizon. There, you can catch a view of the Moon behind buildings or trees, an effect which produces an optical illusion, making the Moon seem even larger than it really is. We are even privileged to see this spectacle on Mar.9, Apr.8, and May 7 of 2020. But if we need to witness the similar type of Supermoon with almost the same distance, we may have to wait till 2026. So, today, everyone be curious to witness this exiting astronomical spectacle and spread the grandeur and essence of Astronomy.

Dr. S.A. Mohan Krishna SKYWATCH Supermoon
Success for Novak Djokovic
“There is need for moral development to protect the weak”