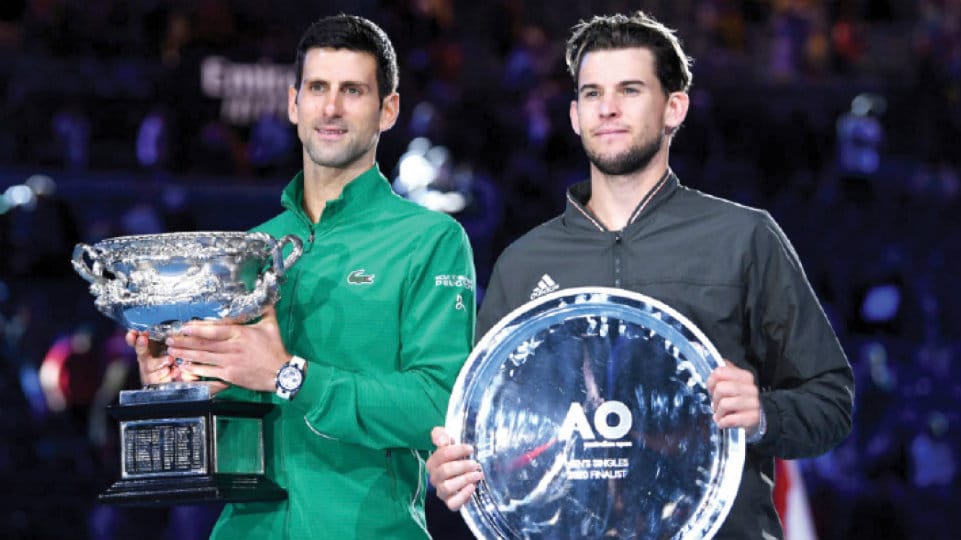 For the record, Novak Djokovic won his eighth Australian Open and in the process, 17th Major title against an upcoming Dominic Thiem in nearly four hours and five thrilling sets. The score line was 6-4; 4-6; 2-6; 6-3 and 6-4. A critical analysis of the various aspects of the match is as follows:

Djokovic as the higher seeded player was clearly the favourite. He had the experience of winning Majors under his belt and according to the tournament schedule, he had an unfair advantage of an extra day’s rest before the finals. Also, this year’s slower court at Rod Laver Stadium seems to suit Djokovic’s game better. (Both were not in Djokovic’s control.)

As against this, Thiem had beaten Djokovic in four of the last five encounters and had shown his nerves in producing marvellous shots under difficult situations. He had won the outdoor hard court Masters 1000 Tournament in 2019 at Indian Wells beating the mighty Federer in the finals.

Among the spectators and fans, Djokovic is the least favoured among the big three. Yet, he had some fan following in Australia until he overtook the individual record of their countryman Roy Emerson. This time, the crowd was clearly for the underdog, Thiem.

While the first set went in favour of Djokovic due to an early service break, the second set was well fought. After a long rally where Thiem won the point, Djokovic was penalized for time violation. He thus lost the game and as he crossed the chair umpire, he touched his shoes and said “Great job. You made yourself famous! Well done.” (Touching the chair umpire by the player is prohibited and liable for a point penalty. Yet the umpire did not impose this penalty and Djokovic in his post-match press conference thanked the umpire for his kind gesture.)

He not only lost this set but his energy level dropped very much and Thiem won the third set as well. Until then, Djokovic had never won a Major final when he was one set to two down.

In the fourth set, Djokovic on his service faced a break point and at this stage, he did something unusual to his natural game. He served hard and volleyed and thus got out of jail. Later he told the press, “This one point separated us tonight between win and a loss.” In fact, Djokovic is not known to be a brilliant tactician and his usual game is to wait for the opponent’s unforced errors by keeping on returning the ball. Here he changed his tactics which paid off!

According to the tennis expert Patrick McEnroe, “Djokovic when it matters, you know he is not going to miss the big points.” How true it was in this case. Thus, Djokovic closed the fourth set at 6-3.

As per past history, five set matches favour Djokovic. His record is 30 victories to 10 losses. More importantly, he had won nine out of the last 10 Major title finals in five sets. In fact in this set, one early service break of Thiem’s service was enough to see Novak Djokovic through.

In summing up, another tennis expert John McEnroe said, “You have to be patient and go big when you have a chance against the Serbian.” But Djokovic’s penetrating ground strokes, improved second service (thanks to his rigorous practice with Goran Ivanisivic during the off-season) and incomparable service returns seem to have worn out Thiem’s patience.

In an eloquent victory speech, Novak spoke about his friend and one of greatest basket ball players, Kobe Bryant who died that week in a freak Helicopter accident. He also spoke about the Australian bush fire and loss of millions of wild life.

By capturing five out of the last seven Grand Slam events, Djokovic is now two behind Nadal’s and three behind Federer’s records. Whether he will surpass their records or not, only time will tell.

Finally, one has to sympathise with Dominic Thiem who was third time unlucky. In the previous two attempts, he lost to Nadal in the French Open, the second time in five sets. And this time it was Djokovic. In his post match press conference, he said, “I am happy that I am able to scompete with these three great champions and hopefully I will win my first Major when these champions are still around.” Well said.