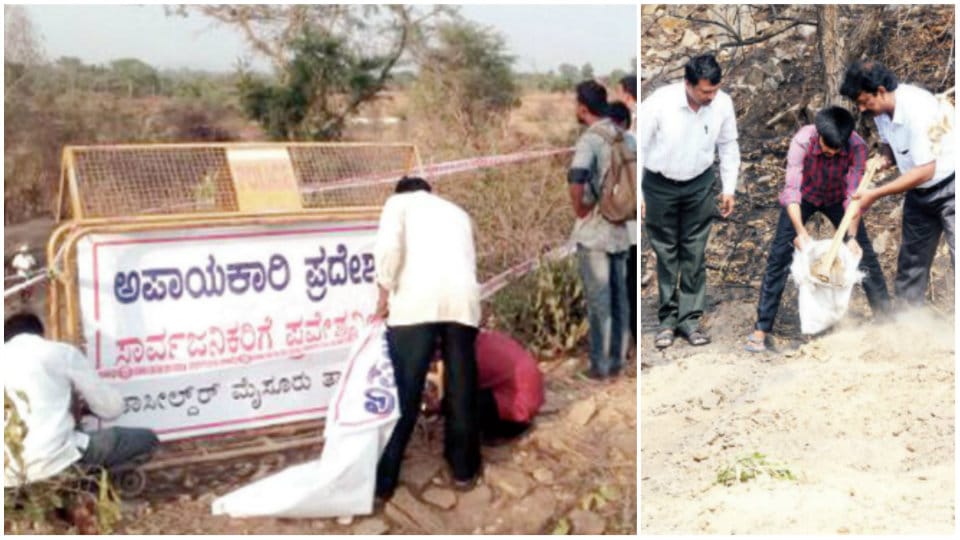 The reason behind the spontaneous fire erupting from an alleged dump of chemical waste spread on a field between  Belavatha and Shyadanahalli on the outskirts of the city is  likely to be demystified in three or four days.

Karnataka State Pollution Control Board (KSPCB) Technical Advisory Committee member Dr. B.S. Jayaprakash and his team of officials arrived here yesterday from Bengaluru and inspected the mystery spot till late in the evening. Samples of soil within a radius of 50 metres from the danger spot were collected for analysis.

Speaking to Star of Mysore, Jayaprakash said that prima facie it appears that the fire was caused by chemical waste but should be confirmed through elaborate tests. He added that the collected soil samples have been sent to the laboratory at the Board’s Regional Office and other four labs for cross verification. He further said that the soil samples should be subjected to various tests lasting for 18 hours to compute the final result.

Environment Officers too teamed with KSPCB Technical Committee in drawing the soil samples.

Fire Brigade personnel and Metagalli Police have taken all precautions to cordon off the danger zone.

Heeding to the advice of Tahasildar, warning sign boards have been erected at the spot. Hundreds of people visited the area out of sheer curiosity.

Dumps of waste were said to have been seen by the banks of Varuna Canal. Though not chemical waste, a heap of blackish powder was seen at the spot where the boy Harshal suffered fatal burns. Possibly with Fire Brigade Personnel spraying copious quantity of water at the spot, no fire was seen erupting despite throwing a heavy object as claimed earlier. However, burnt shrubs in the area clearly indicated the presence of fire. The burnt carcass of the dog was also spotted. It is said that the mysterious fire had consumed several other animals earlier.

Officers of Ground Water Department too visited the spot. Senior Geologist of the Department K.V. Choudary said that water from borewells in the vicinity of the spot would be sent for analysis to ascertain the effect of the unusual eruption of fire on ground water.

Funeral held: The funeral of Harshal, who died of burns was performed at the Christian Cemetery on Nanjangud Road here last evening.

Meanwhile, Dr. Jayaprakash, who has submitted an interim report to DC D. Randeep yesterday, has stated in the report that samples of mud and soil have been sent for testing to State Pollution Control Board laboratories in Bengaluru and Mysuru and also to Ganesh Consultancy and Analytical  Services Laboratory in city.

The report also stated that the lab results would be  known only after four to five days after which necessary steps would be taken.