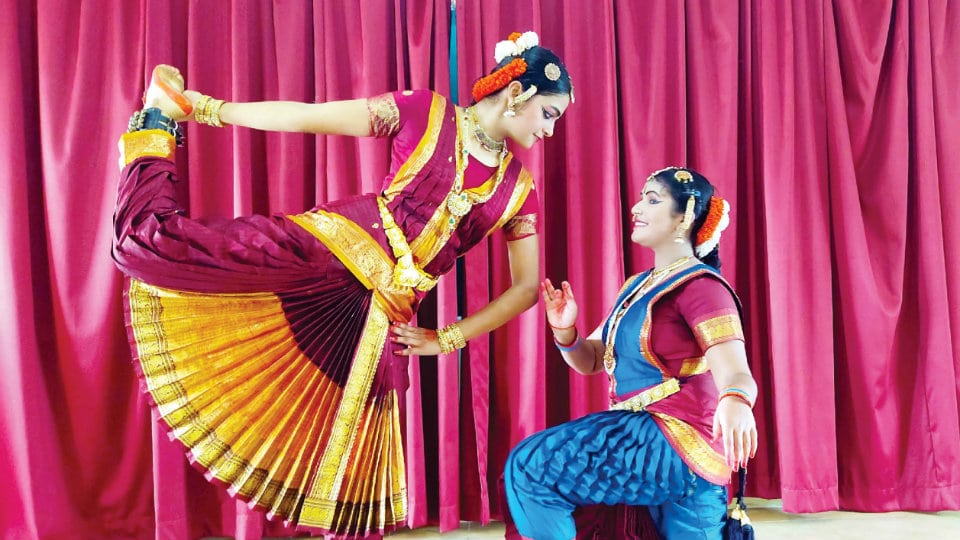 Bharatanatyam recital by Dhyuthi and Shreya

Mysuru:  A unique bharatanatyam performance by Dyuthi Ramesh and Shreya Kashyap was organised at Vijaya Vittala PU College in Saraswathipuram under the aegis of Fine Arts Club recently.

Dyuthi Ramesh and Shreya Kashyap began the day’s performance with ‘Pushpanjali,’ the dance form performed at the beginning, tuned in Nata Raaga, Aadi taala to seek blessings and offer obeisance to God.

The next performance by them was Krishna Kouthwam tuned in Nata raga and Adi tala in which the descriptions of different stages of early life of Lord Krishna, his enchanting ways of childhood were well attributed with good expressions and ease.

Next was the famous kruthi ‘Sri Mahaganapatim’ in Kalyani raga, Adi taala in which the divinity and grace of Lord Ganapathi who preserved the Atma Lingam and broke the ego of Ravana were well presented with excellent foot work, expressions and movements.

Dyuthi and Shreya concluded the programme with Revati raga Eka taala tuned Shivatandava nritya in which the anger of Lord Shiva who is considered as the Laya karaka, with his cosmic dance, who is the destroyer as well as the kind-hearted selfless saviour of his people was synchronously presented by both dancers with swift movements, excellent foot work and rhythm.

Both Dyuthi and Shreya have accomplished in the field of bharatanatyam.

Dyuthi Ramesh is the daughter of S.S. Ramesh, who is working as lecturer in Kannada in Vijaya Vittala PU College and M. Jyothi.

She began learning dance at the early age of four years and has passed in both Junior and Senior Grade examinations conducted by Karnataka Examination Board.

She is the disciple of Guru Dr. Vasundhara Doraswamy of Vasundhara Performing Arts Centre, Mysuru. She has participated in the prestigious Amara Kala Sangha Competitions in the year 2019 and has won the first prize. She has performed in the famous Mysuru Dasara Aahara Mela and also at the torch light parade programmes.

She has performed Karnataka’s ‘Triveni Sangama’ programme. She has won many prizes at various competitions in both State and national levels.

Shreya is the daughter of S. Nagarajan who has worked at Infosys Foundation formerly as DC Head and Nagalakshmi who is the Founder and Principal of Champaka Dance Academy of Mysuru.

She began learning bharatanatyam at the age of three years and excelled in her Junior grade examinations conducted by Karnataka Examination Board and Senior grade under the guidance of her mother. Presently she is learning bharatanatyam from Guru Dr. Vasundara Doraswamy. She has won prizes in many competitions and has performed in different programmes and functions held by prestigious organisations.