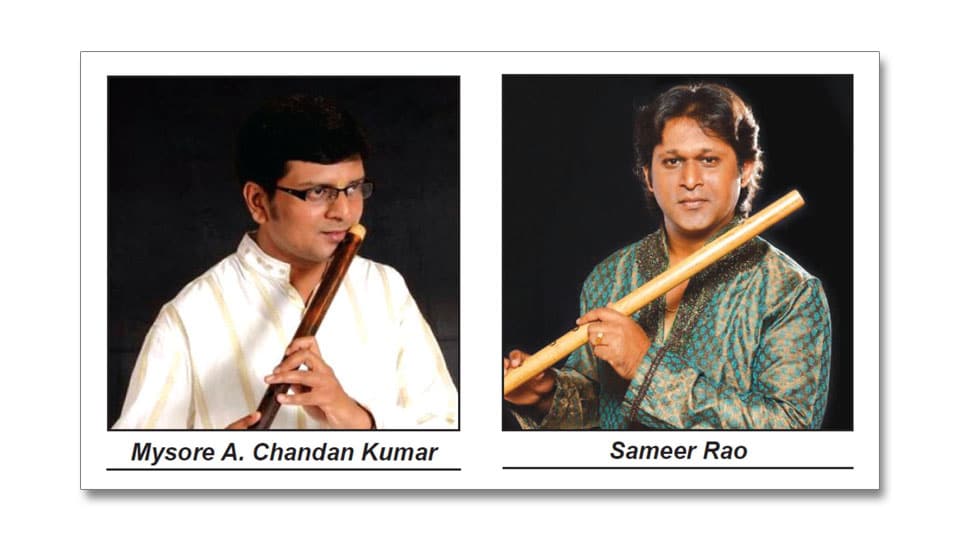 Industrialist and art patron K.V. Murthy will be inaugurating the programme. H.V. Rajeev, President, District Co-operative Union and Adarsh K. Murthy, Partner, A. Shankara Chetty & Sons, Mysuru, will be the chief guests. G. Srikanth  of the Balaga will preside.

On the occasion, the Balaga has organised a musical treat, a flute jugalbandhi by Vid. Mysore A. Chandan Kumar and Pt. Sameer Rao. They will be accompanied by G.S. Nagaraj of Bengaluru on mridanga and Adarsh Shenoi of Bengaluru on tabla. Entry for the programme is free.

Vid. Mysore A. Chandan Kumar hails from a family of great musical heritage. He is the great grandson of the legendary violinist, Sangeetha Kalanidhi, Sangeetha Ratna late Mysore T. Chowdiah (1895-1967), who was a celebrated Karnatak icon of South India. Chandan learnt the art of flute playing from his revered Guru M. Gopalakrishna. He is also seeking guidance under Padma Bhushan  P.S. Narayana Swamy of Chennai.

Chandan was directly promoted from ‘B’ Grade to ‘A’ by the audition board of AIR in 1999. He has performed across the country and abroad including Akashavani Sangeeth Sammelan-2008.

His concerts and interviews have been telecast in Doordarshan, BBC, Radio Munich (Germany) and in many popular TV Channels.

Pt. Sameer Rao started to learn Hindustani classical music and playing Bansuri under the tutelage of Pandit Veerabhadriah Hiremath at Mysuru. In the year 2002, Sameer was chosen as a disciple by the renowned flute wizard Pandit Hari Prasad Chaurasia. He was a resident student of Panditji from 2004 to 2010 at Vrindaban Gurukul, Mumbai, that keeps alive the ancient Guru-Shishya Parampara. Sameer was chosen by his Panditji to look after his newly-constructed Gurukul in Bhubaneswar, Odisha, between 2010 – 2012. Here Sameer taught aspiring students of music and also took care of all the day to day operational activities.

An ‘A’ graded artiste of AIR, Sameer was chosen for a scholarship in 1997-98 by Music and Dance Academy of Karnataka. He was awarded ‘Yuva Pratibha’ by Directorate of Kannada and Culture, GoK, in 2004. Sri Guru Ganayogi Panchakshara Sangeet Yogashram Trust, Chennai, gave him ‘Award of Excellence-2004.’ In 2006, Sri Nadabramha Sangeetha Sabha awarded ‘Nada Kishore.’