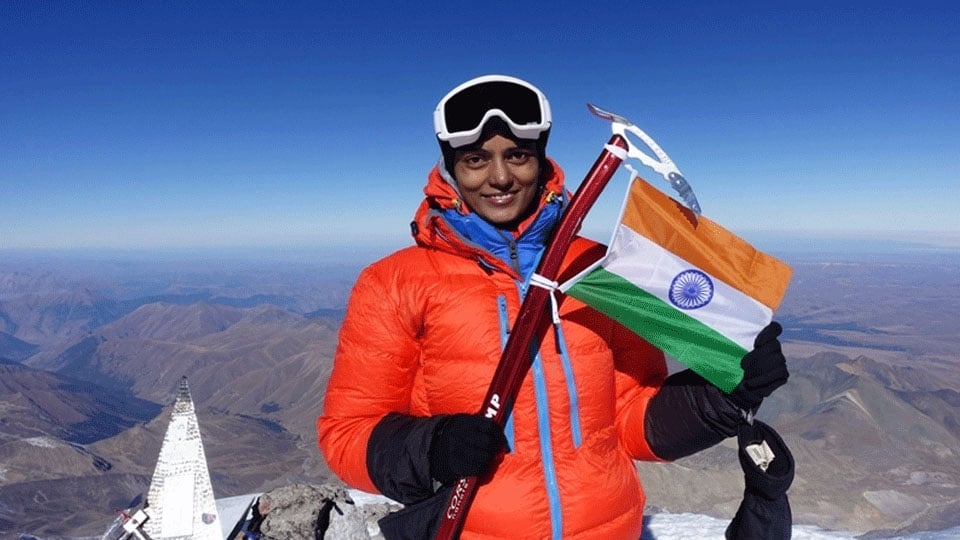 Bhavani from Kodagu, first Indian woman to get trained at Mt. Ruapehu in New Zealand

Bhavani is the daughter of Thekkada Nanjunda (Shambu) and Parvathi (Divya) of Perur village near Napoklu in Kodagu. While studying at Navodaya Vidyalaya, Bhavani joined NCC which paved way to groom her interest in adventure activities.

Having got trained in swimming, horse-riding and mountaineering, Bhavani recently completed a three-month training in skiing at Mount Ruapehu in New Zealand and has been qualified as an International Skiing Instructor and is eligible to undergo advanced training in South Korea.

Mount Ruapehu is a Stratovolcano or a composite Volcano formed by alternate layers of hardened lava and ash.

They are characterised by a very steep profile and periodic explosive emissions. Getting trained in skiing at such mountains is not easy and Bhavani has come out successful in the training in September.

Bhavani, having completed her primary education at J.C. School in Srimangala in South Kodagu, finished her secondary education at Jawahar Navodaya School in Galibeedu, Madikeri taluk. She graduated from St. Agnes College, Mangaluru and had worked as an Instructor at Himalaya Mountaineering Institute, Darjeeling.

Having attended many NCC camps at school and college, Bhavani had participated in the Republic Day Parade in  Delhi in 2016.

She got trained in mountaineering at Atal Bihari Vajpayee Institute of Mountaineering and Allied Sports, Manali and Himalaya Mountaineering Institute, Darjeeling. She underwent skiing training in Gulmarg, Kashmir and further in New Zealand.

Bhavani is acclaimed as the first woman to successfully  complete the tough First Grade Training at Himalaya Mountaineering Institute climbing tough peaks like Friendship in Manali and others in Uttarakhand, Sikkim and Leh.

She reached the top of Mount Elbrus in 2018 after climbing for 8 hours continuously and was adjudged the first to reach the peak among four mountaineers from various countries.