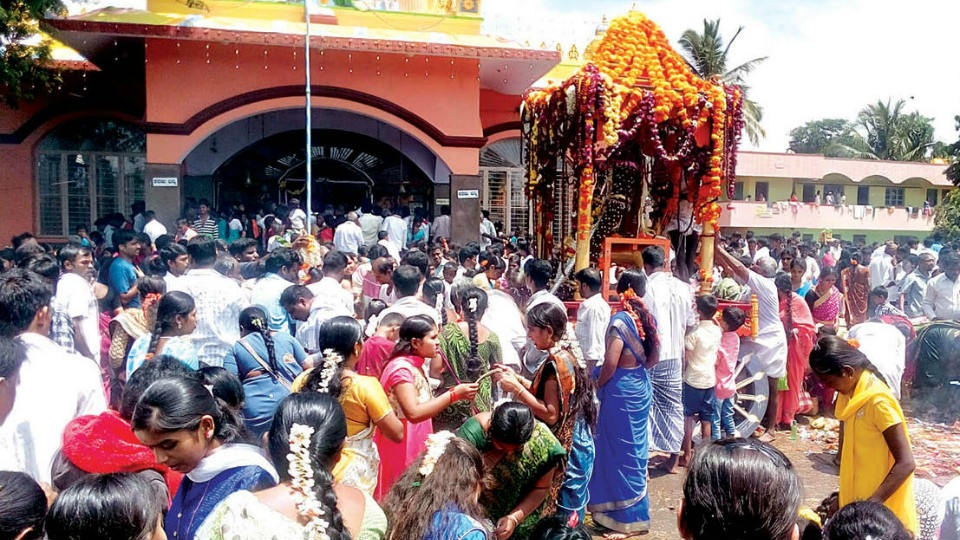 Nanjangud: On the occasion of Bheemana Amavasye, the Sadhguru Mahadeva Thatha Gadduge at the historical Sangama Kshetra in the taluk was specially decorated yesterday with over two lakh Rudrakshis exclusively brought from Varanasi. Over a lakh of devotees had a darshan of the Gadduge and participated in the special puja and Rathotsava.

The rituals began at 5 am with Rudabhisheka, Mahamangalarati, Sahasra Bilwarchane and Rudrakshi Archane. The Rathotsava was held at 9.30 am at the precinct of the Gadduge. Last year, the Gadduge was decorated with 3,500 kg of 108 varieties of fruit and now it was done with Rudrakashis.

According to sources in Bhakta Mandali, the Rudrakshis would be given to devotees at a rate of  Rs. 50 per piece and the sale proceeds of Rs. 15 lakh would be utilised to get a 108 kg silver covering for the Gadduge done.

Prasadam was distributed generously to all devotees. The surge of devotees had resulted in a traffic jam for over two hours with a few Police personnel struggling to restore normalcy. MLA Kalale Keshavamurthy and his supporters too were reportedly stuck in the traffic jam for over an hour before proceeding to have a darshan of the Gadduge. Former Ministers Shyamanur Shivashankarappa, Basavaraj Patil and others visited the Gadduge.