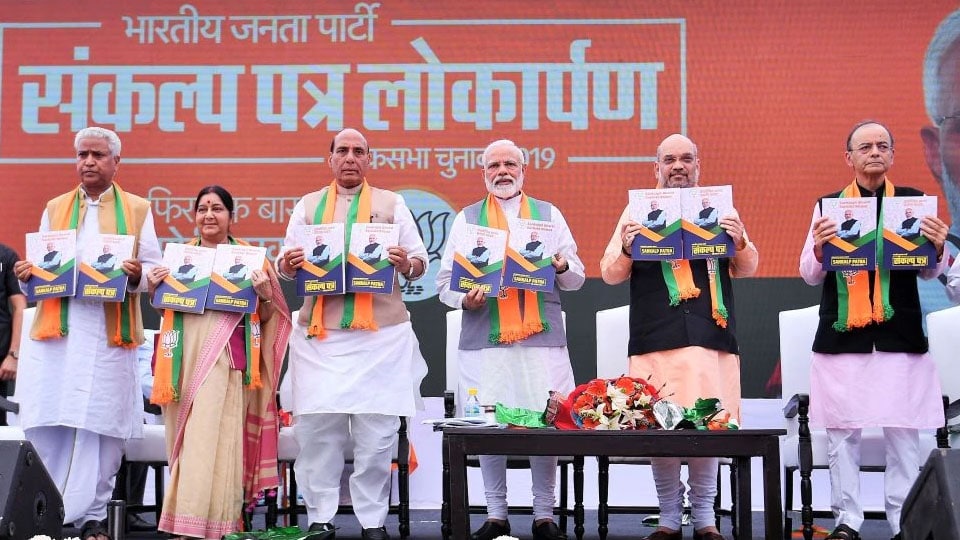 New Delhi: Prime Minister Narendra Modi, along with Amit Shah, this morning released the ruling BJP’s manifesto for the Parliamentary election starting Thursday (Apr. 11). The “Sankalp Patra” or document of promises has been crafted on the theme of a “Sankalpit Bharat – Shashakt Bharat” or “Determined India, Empowered India.” PM Modi sat on the stage, flanked by Home Minister Rajnath Singh and the BJP chief.

Amit Shah, in his introductory message, claimed that India is a “Maha-Shakti” now. The country had slipped in the eyes of the world between 2004 and 2014 but now India is among the top six economies of the world.

The BJP chief said, Prime Minister Narendra Modi has done justice to every sector of the society, with cooking gas connections in rural areas, housing and affordable healthcare for all and welfare schemes for farmers.

While bringing the economy on track, the Prime Minister has shown the world how a scam-free country can be run. PM Modi has struck the source of terrorism and sent a message to the world that no one can play around with the borders of the country, the BJP chief said.

Here are the highlights of the manifesto