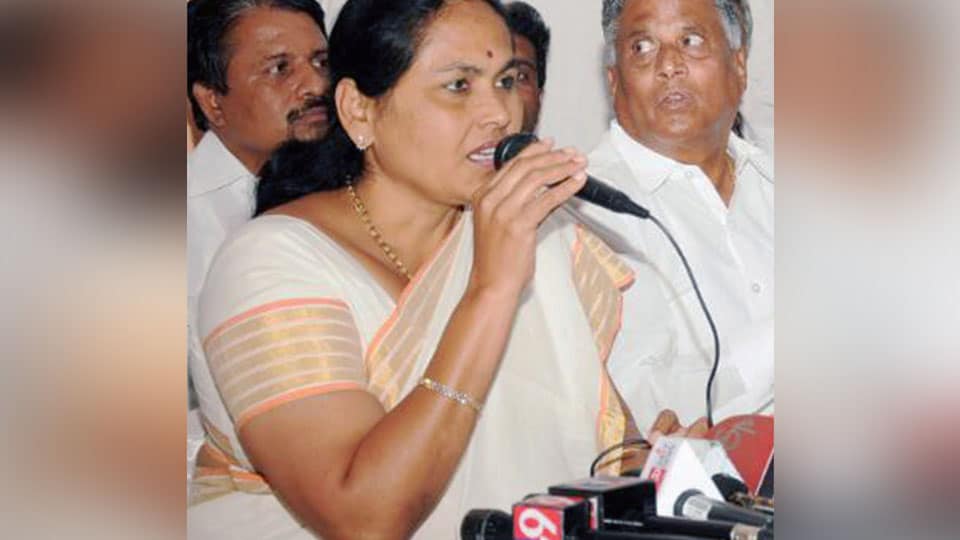 BJP will demolish Congress now and in 2018 also: Shobha Karandlaje

Nanjangud –  Former Minister and Udupi-Chikkamagaluru Member of Parliament Shobha Karandlaje is a bit relieved now after a rather hectic political campaign in support of Nanjangud BJP candidate and former Minister V. Sreenivasa Prasad. She has expressed confidence that the BJP will wrest the seat from Congress.

Interacting with reporters here yesterday, Shobha Karandlaje said that since Nanjangud was a hotbed of caste politics, initially she was very apprehensive about campaigning in such a place. The BJP had given the responsibility of handling Nanjangud campaign to Shobha Karandlaje and former Minister V. Somanna while it had asked former Ministers C.T. Ravi and Aravind Limbavali to focus on Gundlupet.

“I and Somanna had chalked out a detailed campaign strategy as soon as the party entrusted us with this responsibility. I had been told that caste equations will be the deciding factor in Nanjangud. To counter this, we decided to highlight co-existence and amity between caste and communities instead of dividing them. This strategy has worked and we got overwhelming response,” she said.

“During our campaign trail in the interiors of the constituency we realised that people are fed up with caste politics. This made our strategy strong and people were also convinced. Accordingly, we set the stage for the campaign of our leaders including State BJP President B.S. Yeddyurappa and former Minister and sitting Ballari MP B. Sriramulu,” she said. “Our leaders too conveyed the same message and were able to strike a chord with voters,” she opined.

Mentioning that there is no deep division in caste in the Nanjangud constituency, she said that people have realised that promoting caste politics will only divide the society. “People have told us that BJP was the first party to promote cordial relationship between castes,” she added.

“Congress has tried its best to take advantage by dividing castes. We did not allow them to exploit people in the name of caste. We formed booth-level committees including youth and women and conducted door-to-door campaign and street meetings. I and Somanna toured the 146 villages in the constituency twice and I have seen good response from villagers,” she claimed and expressed confidence of winning the election by a big margin.

Shobha levelled allegations against Chief Minister Siddharamaiah and said that the party leadership indulged in electoral malpractices and activities inimical to democracy. “The Police became a puppet in the hands of the CM and were content carrying out his commands and ignored the directions of the DC,” she alleged.

“With the entry of a seasoned and clean-handed and cultured politician like V. Sreenivasa Prasad, the BJP has got a boost and the party has become stronger in the region. This will enable us to win in the 2018 Assembly election. In 2018, BJP will decimate Congress and Yeddyurappa will be the Chief Minister. We have got enough indication that our party will come to power and our Mission 150 can be easily accomplished. Nanjangud and Gundlupet are just a beginning for the end of Congress hegemony,” she said.

Commenting on the electorate, Shobha Karandlaje said, “Voters will teach a lesson to CM Siddharamaiah and his Cabinet colleagues.”