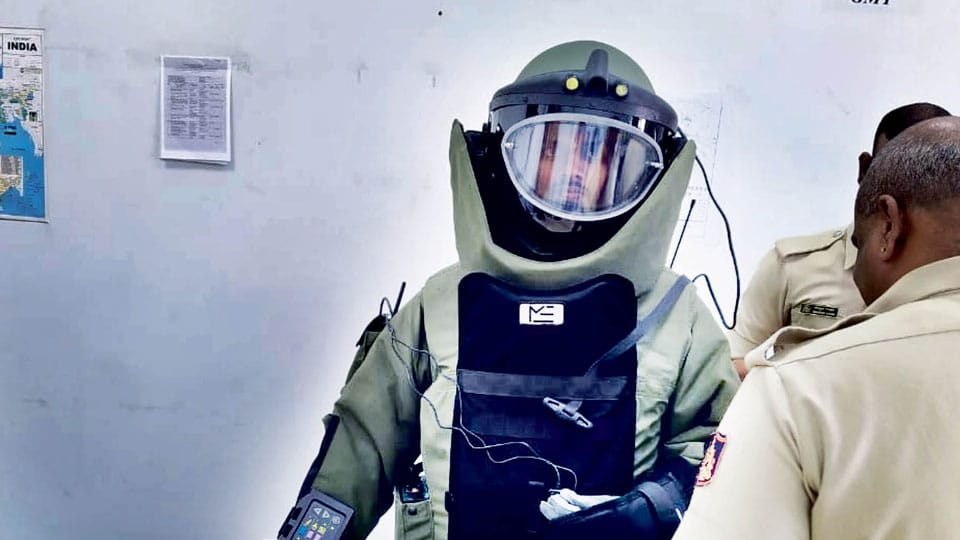 Mysuru: The Mysore Airport at Mandakalli has got an advanced Bomb Disposal Unit through which hazardous explosive devices are diffused and rendered safe. The unit will adopt advanced bomb disposal techniques, including remote methods for handling and dismantling of explosives.

As part of the unit, a Bomb Suit or Explosive Ordnance Disposal (EOD) suit or a Blast Suit has been procured with an estimated cost of Rs. 25 lakh and the speciality of this suit is that even if a bomb explodes near the person wearing this suit, the explosive will have no effect on him.

The suit or the body armour has been designed to withstand the pressure generated by a bomb and any fragments the bomb may produce. It will be worn by a trained personnel attempting bomb disposal. The suit protects all parts of the body since the dangers posed by a bomb’s explosion affect the entire body. Such suits provide tremendous degree of protection from fragmentation, blast overpressure, thermal and tertiary effects should the bomb detonates.

The Bomb Suit was worn and demonstrated to media this morning on the occasion of the inauguration of a new daily flight to Belagavi from Mysore. With the Belagavi flight, the Mysore Airport handles eight flights every day from 7 am to 9.30 pm. With increased flights, the need to enhance security was also felt and the Bomb Disposal Unit has begun functioning in the Airport.

Airport Director R. Manjunath told Star of Mysore that they are in talks with the State Internal Security Division asking them to provide 24/7 security to the Airport by Karnataka State Industrial Security Force (KSISF). Over 50 KSISF personnel will provide round-the-clock security soon.