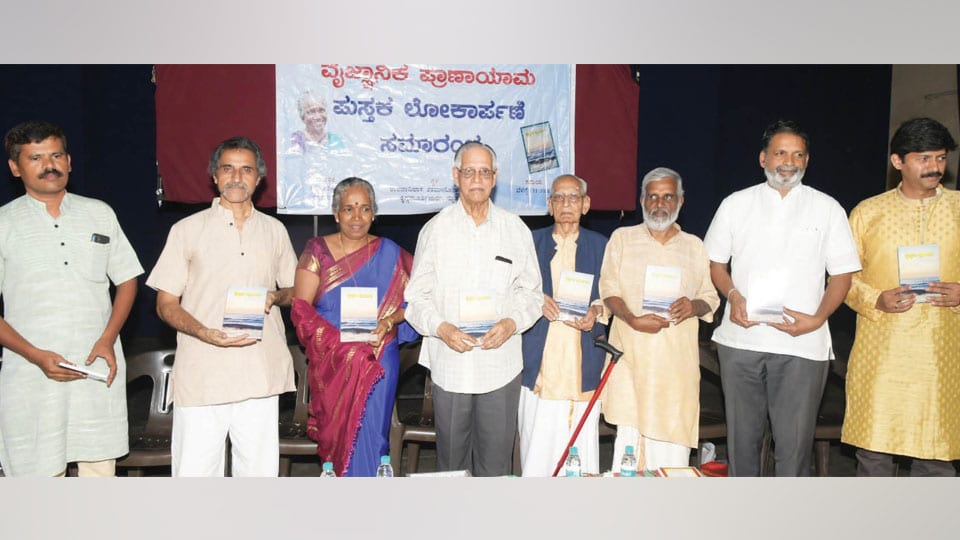 Mysore/Mysuru: Stating that Yoga is an ancient art and Pranayama is a very important part of it, former Chairman of Kuvempu Bhasha Bharathi Pradhikara Dr. Pradhan Gurudatta said that Pranayama is the one that gives an ‘Aayama’ (support) to ‘Praana’ (Breath).

Pointing out that the author of the book has highlighted eight factors that underlines the importance of Scientific Pranayama, Dr. Pradhan Gurudatta said that this Yoga form is very much helpful in beating stress and maintaining good physical and mental health.

Noting that Pranayama assumes special significance at a time when COVID-19  is creating havoc across the globe, he said that Yoga also helps in developing immunity to diseases and as such everyone should practice Yoga for a better health. Pointing out that Pranayama is complimentary to Indian medicine, Dr. Pradhan Gurudatta said that the yoga exercise also finds mention in the epic ‘Bhagavad Gita.’

Noting that the work must also be translated to English, he said that it is better to learn Pranayama from Yoga Gurus, rather than practising it forcefully.

Yoga University of the Americas Vice-Chancellor Yogi Devaraj said that the book will be made available at the next ‘AKKA’ Conference in order to reach out to scores of Kannadigas                              settled in America.