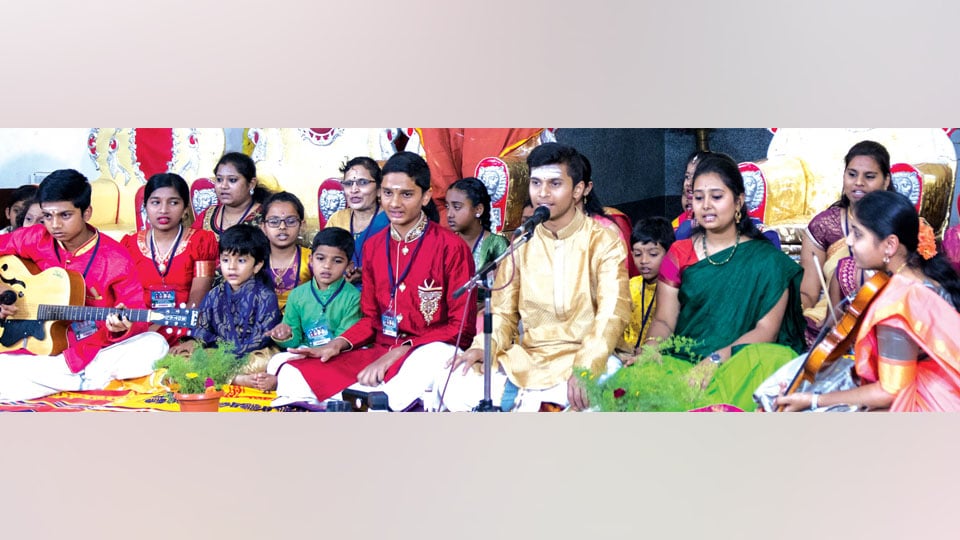 Sri Hamsananda Swamiji of Sadhana Mandira was given a traditional welcome with Poorna Kumbha and vedic chants. Swamiji inaugurated the celebrations along with other invited guests.

Stage programme started with Vedic chanting by Shashidhar Sharma and Kusha Vasishta of Bengaluru. Violinist Nadayogi Mysore V. Ambaprasad, Vice-Chairman of the Vidyalaya, welcomed the guests and also described the evolution of the Vidyalaya and the contribution of its Founder-Chairman late G.V. Murthy.

Mridangist V. Raghunandana Bhargava, Executive Trustee, proposed a vote of thanks. Amritavarshini and Vishveshwara compered. This was followed by an instrumental programme ‘Vadya Vaividhya’ by the students of the Vidyalaya. They were accompanied by Vid. Mysore Natraj on mridanga and Vid. Mysore G.S. Kumar on ghata.

The next event was a Grand Flute Recital by Young Maestro C.S. Keshava Chandra, son and disciple of Shreshta Acharya Dr. C.A. Shreedhar. He was accompanied by Mysuru Vishveshwara Bhargava on violin, Malladi Aravind on mridanga and Vid. Mysore G.S. Kumar on ghata.