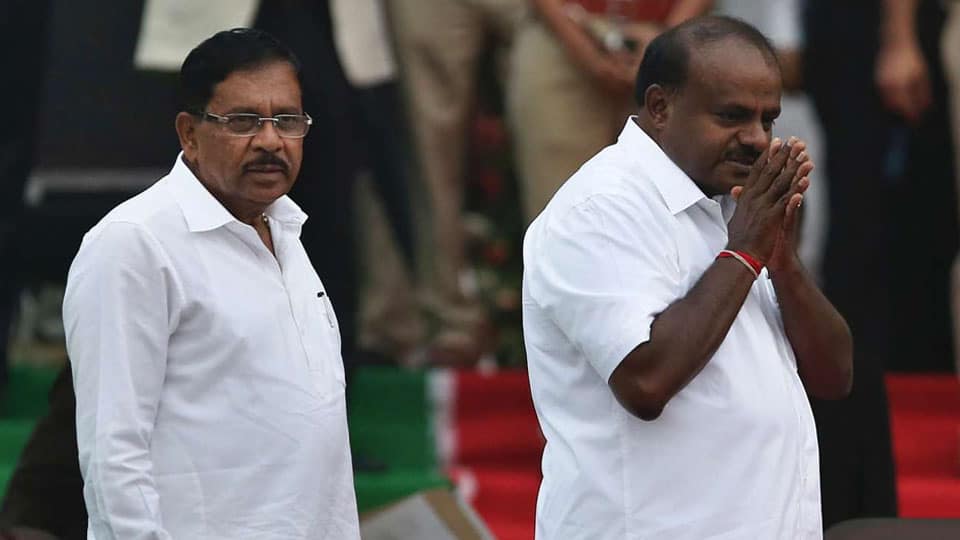 Chief Minister H.D. Kumaraswamy, who had opposed Tipu Jayanti celebrations when he was in the Opposition, skipped the event after being advised rest by doctors attending him.

The CM has undergone coronary artery bypass surgery twice in the last 12 years, and has a history of diabetes and hypertension.

A statement issued from the CM’s office said that Kumaraswamy has been advised rest by doctors till Nov.11.

Meanwhile, Deputy Chief Minister Dr. G. Parameshwara’s office stated that the Dy.CM was out of town and will return only late on Saturday.

They, however, did not specify any reason for his absence from the event. Sources told Star of Mysore that Dr. Parameshwara is in Singapore on a personal visit and will not return till Nov.11 (tomorrow).

Kumaraswamy and Dr. Parameshwara staying away from the event exposed the pseudo-secularism and duplicity of the ruling alliance, the BJP mocked.

Sources from the CM’s office said that the CM was in good health and was taking rest due to the strain of campaigning in the recent by-elections in Ramanagaram. “Due to political pressure in the recent Karnataka by-polls, he has been advised rest for three days.

His health is fine and is currently at a resort in H.D. Kote on the backwaters of Kabini Reservoir with his wife Anitha Kumaraswamy and actor-son Nikhil Kumaraswamy. Even private visits to meet the CM at the resort are barred,” said the source.

READ ALSO  Tipu Jayanti event only at Kalamandira in Mysuru

However, Minorities Welfare Minister B.Z. Zameer Ahamed Khan, however, exerted pressure on the former through Congress Legislature Party leader Siddharamaiah to hold the event in Vidhana Soudha. Sources said that Dr. Parameshwara was not happy with the pressure tactics of a junior Minister Khan and decided to skip the event.

The High Court of Karnataka yesterday again declined to pass an interim order against celebrating Tipu Jayanti. It observed that in 2017 as well,  the Court had refused to stay the Government’s decision to celebrate the day on a PIL petition, which is still awaiting final adjudication.

Following this, the petitioner’s Counsel said that he would file an application to challenge the Nov. 8, 2016 order. The Court said it was open for the petitioner to adopt the appropriate procedure as per law.