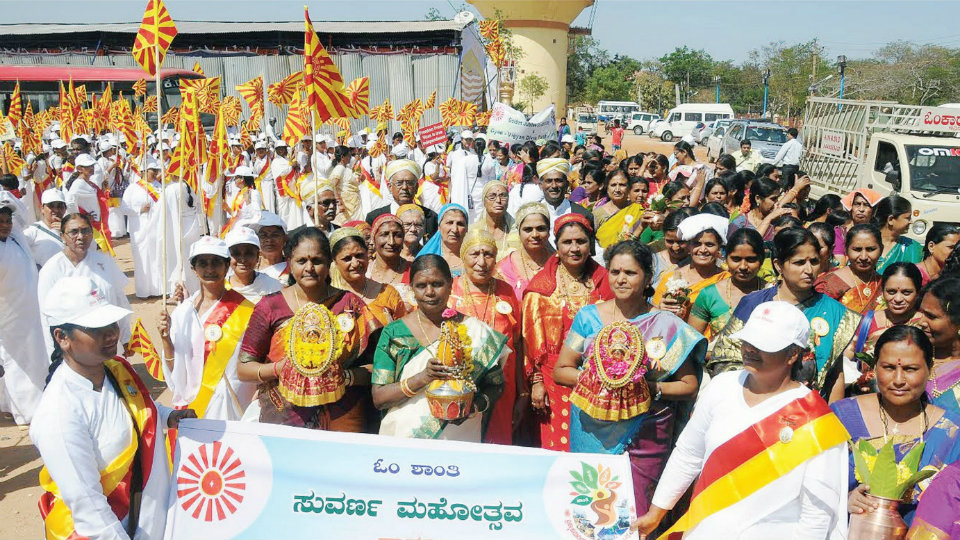 Over 2,000 Brahmakumaras and Brahmakumaris take part in rally; event throws light on inculcation of human values

More than 2,000 Brahmakumaras and Brahmakumaris from Mysuru, Mandya, Chamarajanagar, Kodagu and Hassan districts and from other parts of the State as well from the neighbouring State of Kerala took part in the Shanthi Shobha Yatra procession in city this afternoon to mark the beginning of the 15-day ‘Gnana-Vignana Divya Darshana Mela at Maharaja’s College Grounds.

The mega event is being organised by Prajapita Brahmakumaris Ishwariya Vishwa Vidyalaya, Mysuru Sub-Division as part of its Golden Jubilee celebrations.

Earlier in the morning, Brahmakumaras, Brahmakumaris and other volunteers, who had arrived from other parts of the State, underwent a training session during which they were educated on the programmes of the 15-day event.

The mela which throws light on the inculcation of human values and holistic health is aimed at educating people on liberating themselves from all types of vices, besides experiencing bliss, through the practise of Rajayoga and meditation. The event features a total of 24 specially designed stalls.

The first two stalls at the entrance are dedicated to information on Prajapita Brahmakumari Ishwariya Vidyalaya branches and activities across the country and world.

The rest of the stalls feature darshan of Amarnatheshwara in a cave at a height of 40 ft., 27 ft., long-sleeping Kumbakarna, who will sit up and speak, divine darshan of Dwadasha Jyothirlingas, moving models depicting Ramarajya, value-based games, free counselling for drug addicts, 3D and laser shows to experience meditation, Ishwariya literature etc.

The mela also features Rajayoga and meditation classes, seminar and cultural programmes, divine discourses etc., on the evening of everyday. The mela concludes on Feb. 26. PWD and District in-charge Minister Dr. H.C. Mahadevappa will formally inaugurate the mela this evening.