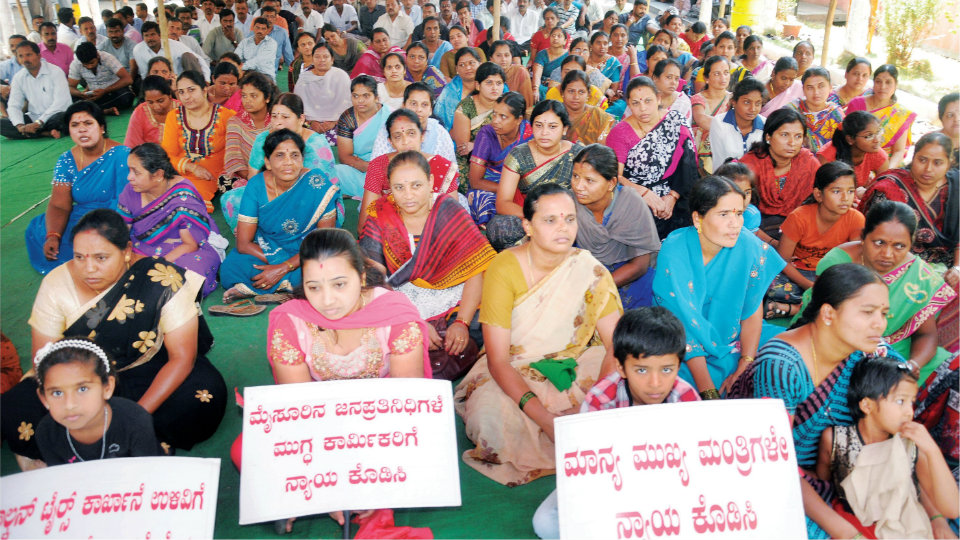 More than 500 employees of Falcon Tyres along with their family members and children attended a “Save Falcon” meeting this morning and made a fervent appeal to the State Government and Chief Minister Siddharamaiah to intervene and save the factory from being added to the list of defunct factories. They have threatened to launch a ‘Jail Bharo’ agitation and a rally to Bengaluru.

The meeting was held at the factory premises to chalk out the future course of action including a mass movement and ‘Jail Bharo’. The meeting was fixed at 11 am and employees along with their women and children arrived as early as 10 am and were seen pleading with the organisers of the meeting to save them from the crisis. With a feeling of sadness writ large on their faces, women were hoping that this meeting would give the factory a new lease of life.

The meeting began after paying homage to the four employees who committed suicide unable to face the distress situation.

Speakers including Melukote MLA and farmers’ leader K.S. Puttannaiah questioned the silence of Siddharamaiah. “Falcon Tyres employees have been left in the lurch by a least-bothered management and Siddharamaiah’s silence on the issue is questionable,” he said.

Despite being from Mysuru and knowing that 4 employees have committed suicide, the              CM is ignoring over 2,500     employees and their family members, he alleged.

Puttannaiah said that the employees must be ready to go to jail. “We will soon launch a ‘Jail Bharo’ agitation to wake up the State government as the employees have tried all sorts of protest including hunger strikes, road blocks and protests. We are ready to take our families to jail as we will get free food there,” he said and appealed to the employees not to take the extreme step of committing suicide.

According to speakers at today’s meeting, tyre manufacturing was a profitable business and Falcon Tyres has a premier position in the market in terms of its quality and durability. “The company has been mismanaged by vested interests,” speakers said.

Mysuru BJP City Unit President Dr. B.H. Manjunath said that if the State Government had a will, the Falcon crisis can be solved within no time. “It is not fair on the part of the Chief Minster to run away from the problem and he must act immediately as he has already promised to solve the crisis,” he said.