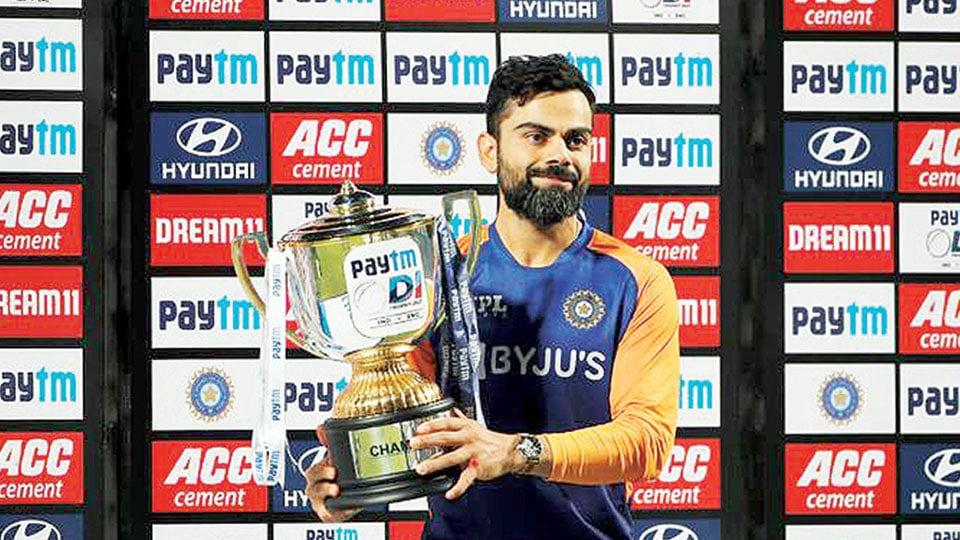 Over 1.3 Billion hearts started pounding as Natarajan was called to bowl the last over. Quickly, I was reminded of the last over of the finals of T20 ICC World Cup of 2016. England Vs WI at Kolkota. WI needed 19 runs off 6 deliveries. Atmosphere was tense as Ben Stokes bowled to Carlos Brathwaite. World went hysteric as Brathwaite smote 6, 6, 6, 6 to lift the trophy. In this match, Sam Curran was striking the ball beautifully and was well set to stage an upset. But, Natarajan delivered and we lifted the cup.

Earlier, Hardik (2) and Shardul (1) dropped sitters to enable England come so close to victory. Well, it is all nerves in ‘Pressure Cooker’ games. “If we have to be seen as a top team in the world, we need to perform in times of crises.” Alas, that was not to be. On the flip side and in true sporting spirit, we salute the Englishmen for their excellence in all the three formats. Luck was not with them. In the midst of challenging cricket, the DRS added entertainment to the game. We will visit them later.

Historically, track at Pune, Maharashtra Cricket Association, is a ‘Belter’. Batting is a pleasure with the ball coming nicely onto the bat; hard for the bowlers to contain runs. A precedent had been set in 2016-17; at the same venue. Batting 1st, England put up a total of 350 in 50 overs. Roy, Root and Stokes piled misery on our bowlers. Eventually, we won the match in the 49th over. Virat scored a brilliant 122 @ 116 S/R and Jadav 120 @ 158 S/R. It was all ‘Fireworks’ with 55 Fours and 23 Sixes in the match; accounting for 358 runs.

In the foregoing backdrop, it looked that totals only in excess of 350 were defendable at this venue. Towards this, the top order not only had to bat long but also with a well calculated ‘Strike Rate.’ Recalling the series in reverse chronology is exciting, however.

3rd ODI: Imagine 681 runs scored in a matter of seven plus hours. Bowlers kept twitching their fingers hoping for the batsmen to commit mistakes; and interestingly, top order of both sides not contributing much. India batting first put a good total of 359 on board; thanks to heroic knocks from Pant 78 @ 126 S/R, Hardik 64 @ 146 S/R and Thakur’s 30 @ 143. Shikar steadied the ship at the top with 67 @ 120 S/R; but unable to get support from Rohit, Virat and KLR.

At 150 for 4, England looked to fold up within 300. But, Malan and Curran crafted a formidable partnership and almost snatched off “Victory from the Jaws of Defeat” as the fortunes swung unpredictably in the last 8-10 overs; thanks to sitters dropped. Ending at 322, they lost by a whisker. Sam’s 95 was a treat to watch.

But, the intriguing question is “Did Curran commit a mistake not trusting Wood’s abilities” — though Wood batted beautifully in tandem. Surely, they lost 10-15 runs while Curran chose to keep strike.

Here arose the comedy of the DRS. Please read carefully. There is something fishy that great minds of the ICC have missed out.

“Pant was adjudged LBW off Wood. The ball raced to the boundary. Immediately, Pant asked for a referral. The ball had flown off the toe of the bat; and Pant was declared ‘Not Out’. But, the FOUR RUNS were not granted. Why? As per ICC rule book, the ball is DEAD when he is declared out; notwithstanding DRS. Arrey Bhai, when the decision is overturned, the ‘Dead Ball Became Alive’ and obviously all that followed accrues to batsman’s account.”

Let us examine another example. “If the batsman is adjudged LBW, the ball caught in the process and the decision is overturned in the DRS, the 3rd umpire checks if there was a SNICK. If there is a SNICK, the batsman is given out; ‘CAUGHT’. HOW? As per ICC rule, the ball is dead at the impact of the pad — because the umpire has declared him out LBW.” Sounds ridiculous. Brilliant brains. Huhh.

Anyway, 25 Fours and 20 Sixes plundered mercilessly by the combo of Roy, Bairstow, Stokes and Livingstone in the 44th over were too good to watch as England won the match. Credit to them.

In reply, Roy and Bairstow took the wind out of our bowlers hammering 135 for the 1st wicket. Cricket is a FUNNY game. Even the Indian cricket lovers felt sad for the Englishmen as they collapsed from 135 for no loss to 251 all out.

A hard fought series. Fireworks from willows created great colours — in early commemoration of HOLI. Best to all the players over the world who congregate on our lands for the IPL to commence on the 9th of April.