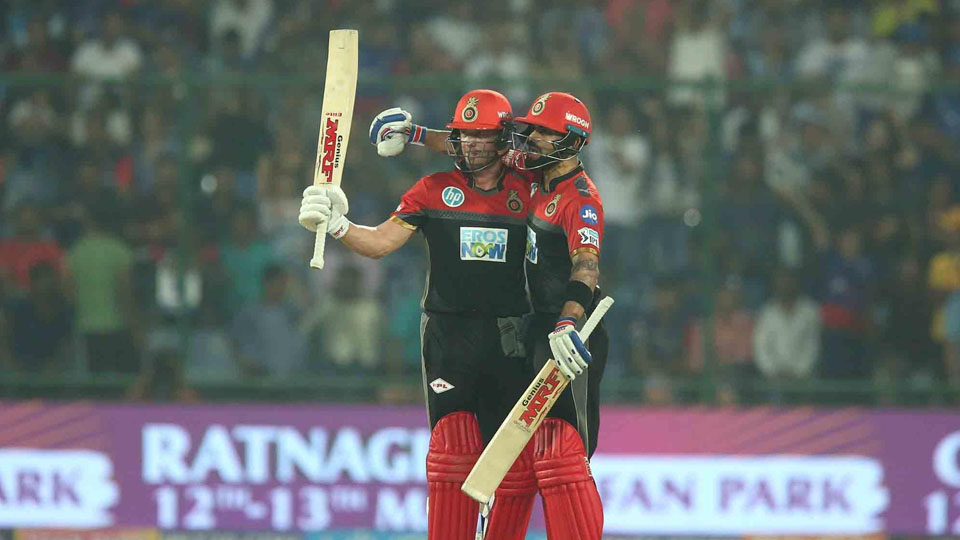 It was the Virat Kohli and AB de Villiers show for Royal Challengers Bangalore (RCB) as they kept their hopes alive in the IPL with a five wicket win over the Delhi Daredevils at Feroz Shah Kotla yesterday.

It was a similar script for Delhi Daredevils (DD) as their batsmen did the job and posted 181/4 in 20 overs but bowlers failed miserably yet again as RCB chased the target in just 19 overs.

Kohli led the chase from the front after openers Moeen Ali (1) and Parthiv Patel (6) were dismissed early. Nepali teenager Sandeep Lamichhane picked his first wicket of the tournament when he removed Patel. But Kohli and de Villiers then put on118 runs for the third wicket with Delhi bowlers not having any answers for their brilliance. The skipper showed his tremendous wrist work, clearing the short Kotla boundaries at will and taking the game away from Delhi.

By the time Amit Mishra removed him, he had scored 70 off just 40 deliveries with three sixes and seven boundaries. de Villiers was then starved of strike and he kept on losing partners as Mandeep (13) and Sarfraz (11) departed quickly.

But as soon as the South African got back strike, he sealed the game in stunning style with consecutive sixes off Trent Boult, inflicting further misery on Delhi.

AB de Villiers was chosen as the ‘Player of the Match.’

Chasing a mammoth target of 246 to win, Punjab openers KL Rahul and Chris Gayle got off to a flier and took the team’s score past the 50-run mark in no time. But their 57-run partnership was finally ended by Russell, who got the prized wicket of Gayle for 21. On the next delivery, Russell got the wicket of Mayank Agarwal who was dismissed for a golden duck after the right-hander hit the ball into the hands of Javon Searles at mid-wicket boundary. Karun Nair too followed suit soon as became Russell’s third scalp of the day for 3. But Rahul continued his glorious form and complete his third consecutive fifty and fifth of the season off just 22 deliveries. But soon after reaching his fifty, Rahul lost his concentration and he was castled by Sunil Narine for 66.

Axar Patel was the next batsman to depart as he became Kuldeep Yadav’s only scalp of the innings. That brought Aaron Finch and Ravichandran Ashwin in the middle and the duo started the task of rebuilding the innings and provide some respectability to the score. Finch and Ashwin put on 37 runs for 6th wicket to keep the scoreboard ticking with some lusty blows. But Finch’s 34-run innings finally came to an end as he became Searles maiden IPL scalp on his debut.

Ashwin and Andre Tye hit some big blows right at the end and took the team’s score over the 200-run mark. Ashwin slammed four boundaries and three huge sixes in his innings of 45 but it wasn’t meant to be as Punjab fell short by 31 runs.

Sunil Narine was chosen as the ‘Player of the Match.’