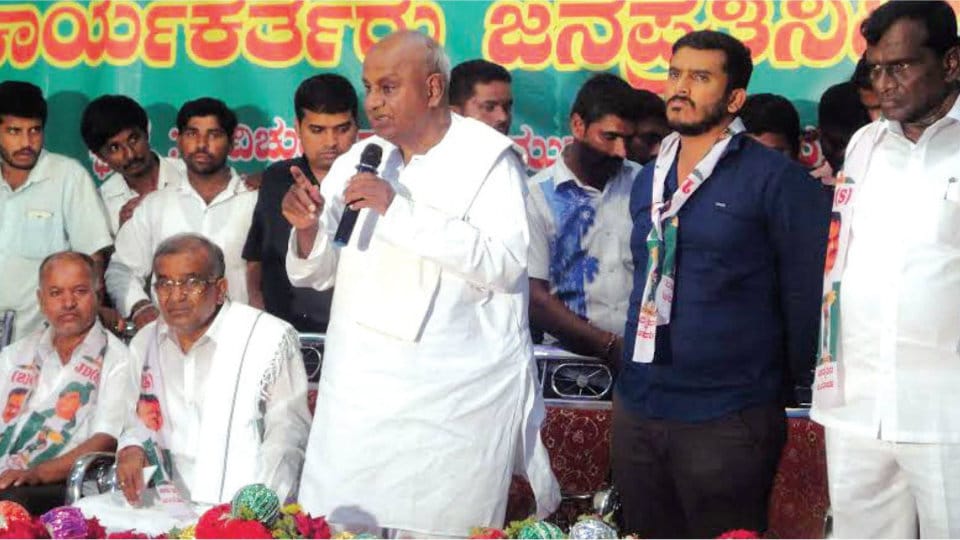 Bringing back JD(S) to power is my last wish: H.D. Deve Gowda

Hunsur: Stating that bringing back JD(S) to power in the State was his last wish, former PM and JD(S) Supremo H.D. Deve Gowda has appealed the electorate to support the party in the 2018 Assembly polls.

Addressing a meeting of party workers at Adichunchanagiri Kalyana Mantap in the town yesterday, Deve Gowda asked them not to have any confusion over the party nominee for Hunsur Assembly segment.

Pointing out that the only aim of JD(S) workers should be to bring the party to power in the 2018 polls, he asked them to leave the choice of party candidate from Hunsur to top brass or else to make their own choice.

Later, local party leaders who addressed the meeting, demanded that G.D. Harish Gowda, son of Chamundeshwari MLA G.T. Devegowda be given the party ticket from Hunsur.

MLA G.T. Devegowda in his address, said that his family will respect the party’s decision and support the candidate chosen by party leaders.

Soon after H.D. Deve Gowda returned to Mysuru, former MP A.H. Vishwanath who quit the Congress recently, met the former PM at the farmhouse of former University of Mysore Vice-Chancellor Prof. K.S. Rangappa at Bogadi in Mysuru.  Prof. Rangappa is a close relative of H.D. Deve Gowda. The two leaders held discussions for quite sometime, hinting that Vishwanath is almost certain to join the JD(S) in the first week of July.

Deve Gowda is said to have told that the JD(S) is happy to welcome him. MLA G.T. Devegowda, Prof. Rangappa and others were present during the meeting. Meanwhile, it is learnt that A.H. Vishwanath will be joining the JD(S) at the party office in Bengaluru on July 4, in the presence of State Unit Chief H.D. Kumaraswamy and other senior party leaders.