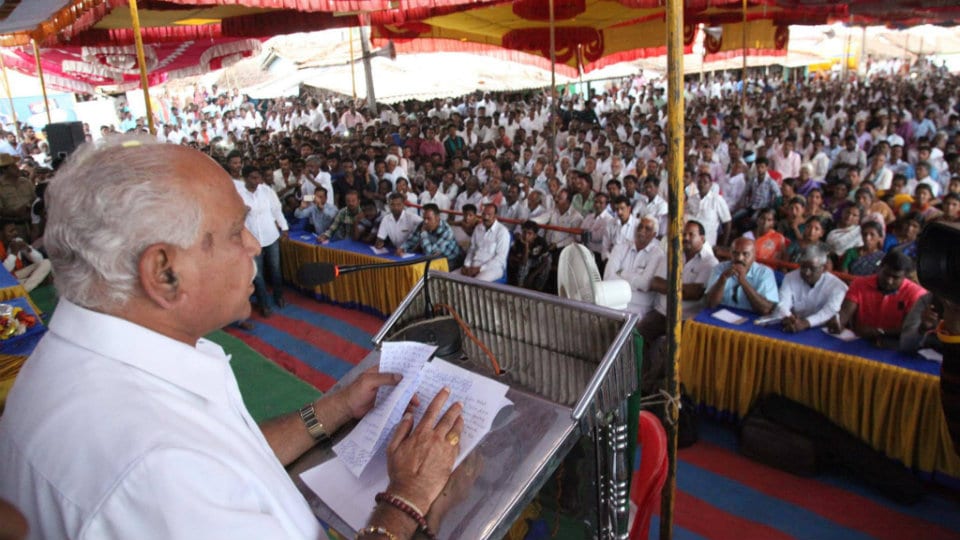 BSY appeals electorate to vote for BJP in by-poll

Promising that Gundlupet will be adopted if the BJP candidate Niranjan Kumar was elected in Gundlupet by-poll, State BJP Chief B.S. Yeddyurappa has appealed the electorate to reject the Congress candidate. Speaking at the party’s election rally at Begur in the taluk yesterday, he said that BJP candidate Niranjan Kumar’s family continued in public service even after from successive defeats in the Assembly election and this showed the family’s commitment for serving the people.

Claiming that he had specific information about distribution of huge sum of money by the Congress through Government servants and the Police, he asked the party workers to keep a close tab on the activities of Congress Ministers and leaders who visit the constituency seeking votes.

Appealing the electorate to outrightly reject Congress just as the electorate in UP and Uttarakhand did in the recent Assembly polls there, he said the election of BJP candidate will open the doors for real development in the taluk.

Those who filed nominations on Friday were M. Pradeep Kumar of Hanur in Kollegal, S. Mallanna of Devarasanahalli in Kasaba hobli of Nanjangud and Subbaiah of Ashokapuram in Nanjangud.

The last day for filing of nomination papers in Mar. 21.

No nominations for Gundlupet by-poll: However, Gundlupet Constituency, which is going for the bypoll along with Nanjangud on Apr. 9, saw no nominations even on the fourth day on Friday. However, Congress candidate for Gundulpet by-poll Dr. Geetha Mahadevaprasad will file her nomination papers on Mar. 20, according to party sources.