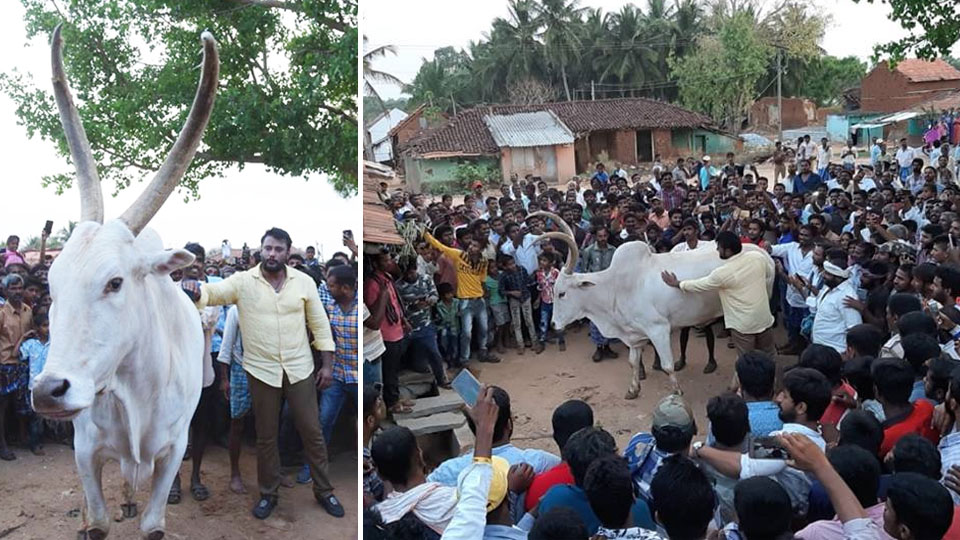 K.R. Nagar: Everyone is aware that film star Darshan loves animals who now is canvassing for Independent candidate Sumalatha Ambarish contesting from Mandya LS seat. His compassion for animals again came to limelight when he was campaigning in K.R. Nagar.

During the road show yesterday in the town, a huge white bull came in front of his vehicle. The bull having two big horns which stood amidst the people refused to budge from the place. Though the supporters of the star gathered around tried to push it, they were unsuccessful.

Darshan after getting down from the vehicle put his fingers in the mouth, whistled and requested the crowd not to create any confusion and steadily moved towards the bull. And then he slowly started patting the bull that was firmly entrenched in the place.

With this gesture, the crowd broke into a rapturous yell, and as though the people had interfered in his solitude, the bull turned his face once to the right and heaved out a heavy sigh.

Darshan admonished the people and once again patted the bull and whispered asking it to move forward. As though he understood Darshan’s pleadings, the bull suddenly moved away.

Impressed with this action of their favourite star, the joy of his fans knew no bounds. The fans who had captured the whole action on their mobiles shared it on the social media. This video has gone viral and already there are thousands of likes.