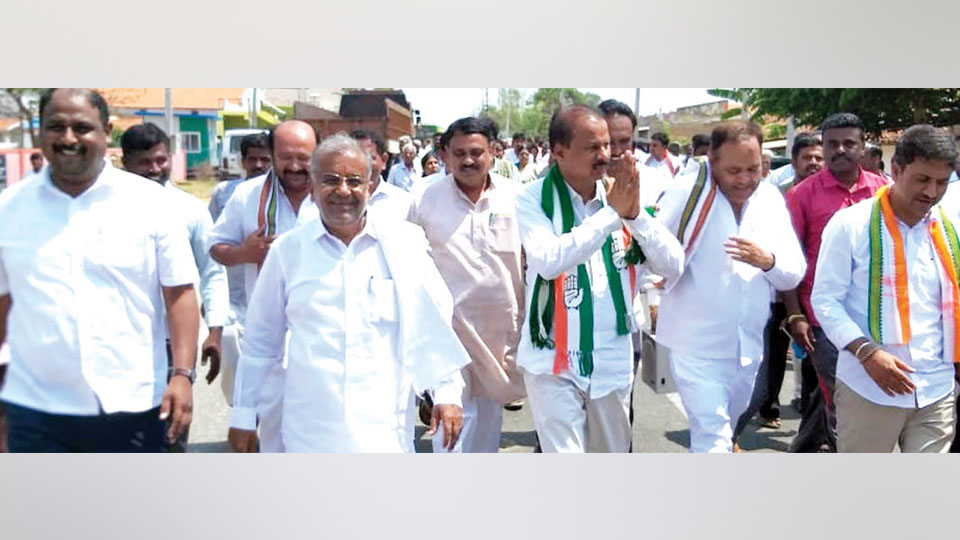 T. Narasipur: There are twin objectives in this election, one is to strengthen the leadership of H.D. Deve Gowda (HDD) at the national level and the second is to see that Chief Minister H.D. Kumaraswamy completes his five-year term in the coalition government which he leads. Hence, in the present Lok Sabha elections, JD(S) leaders and workers must support R. Dhurvanarayan, the JD(S)-Congress coalition candidate in Chamarajanagar and ensure his victory, said Higher Education Minister G.T. Devegowda (GTD).

He was holding a padayatra at the taluk’s Beedanahalli, Turugnuru, Yachenahalli yesterday and canvassing for Dhruvanarayan and said that at the national level the secular forces must fight united in the Lok Sabha elections. The JD(S) and Congress party workers must support the leadership of Deve Gowda and Rahul Gandhi and work towards the victory of the coalition candidates with widest margins, he urged.

In the old Mysuru region, there was big fight between the JD(S) and Congress during the Assembly elections. We ourselves were fighting one another. But during this Lok Sabha election, we have to come together to fight against the BJP. It is our responsibility to see that Dhruvanarayan who is a very simple and cultured man always working in the interest of the people gets elected to the Lok Sabha again, said GTD.

Candidate Dhruvanarayan urging the voters to re-elect him said, “In the last decade as a MP, I have brought several schemes and projects to the people of the area. It is only in the interest of serving the people that I am fighting the election. I do not have desire for power or any other ulterior motive. Since I have the energy and zeal to work, you must re-elect me to Lok Sabha.”