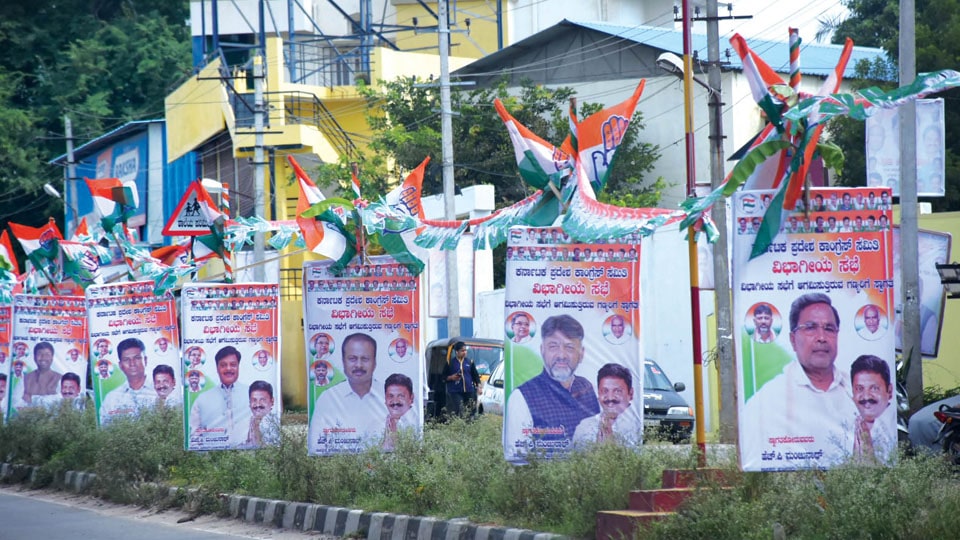 Mysore/Mysuru: The local Congress party workers had decorated the main roads and important Circles with banners, buntings and flexes of their leaders. The flexes were found more at Party Office, Dasappa Circle, JLB Road and on the way to Silent Shores Resort & Spa in Hootagalli, where the day-long Division-level meeting of Congress leaders is being held.

The enthusiastic workers took out a bike rally on the main thoroughfares of the city. Today’s Divisional meet is attended by MPs, MLAs, former legislators, defeated MLA candidates, Chairmen of various Units of party and important office-bearers of four districts. It is said to be a brain-storming session mainly aimed at preparing rank and file of Congress for the coming Zilla Panchayat and Taluk Panchayat polls and the crucial 2023 Assembly polls.

This meeting is held closed door and open only for invitees. The media persons were sent out of the meeting hall after taking the group photo and video of leaders on the dais.

Meanwhile, Siddharamaiah arrived at Mandakalli Airport and was received by Varuna MLA Dr.Yathindra Siddharamaiah, HD Kote MLA Anil Chikkamadu and others. Then, he drove straight to the meeting venue. The meeting was on when we went to the Press at 2 pm.