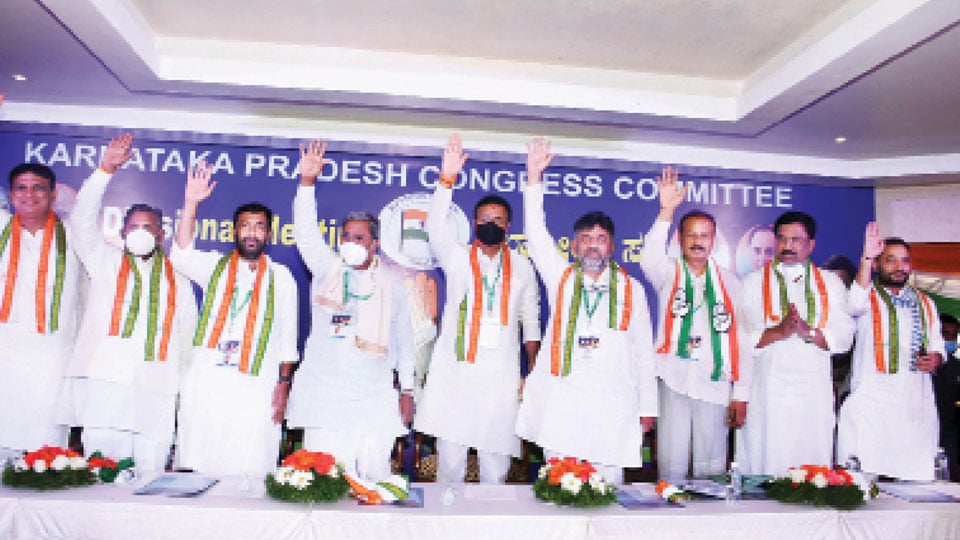 Mysore/Mysuru: The visit of AICC General Secretary and Party In-Charge of Karnataka Randeep Singh Surjewala in city this morning in connection with the Divisional-level Meeting as part of rejuvenation of Congress has enthused rank and file of the party.

Hundreds of workers from the neighbouring Mandya, Kodagu and Chamarajanagar districts, besides, Mysuru district, have arrived in city as a show of strength before the Delhi leaders. Hosts of State leaders, former CM Siddharamaiah, KPCC President D.K. Shivakumar, Leader of Opposition in the State Legislative Council S.R. Patil, KPCC Working Presidents R. Dhruvanarayan, Eshwar Khandre and Saleem Ahmed are participating in today’s day-long meeting to recharge the party keeping in view the crucial 2023 Assembly elections.

A similar Divisional meeting of Mumbai-Karnataka region was held in Hubballi yesterday in which all top leaders including Surjewala participated.

When Surjewala and Shivakumar arrived at City Railway Station from Hubballi early this morning, a traditional welcome with ‘Poorna Kumbha’ and ‘Nadaswaram’ was offered. The party had taken permission from local Railway authorities to accord a formal welcome for their leaders. Accordingly, a flower-decked Sarot (chariot) was kept ready at the Railway Station in which both the leaders travelled till the Congress Office at nearby Dasappa Circle, accompanied by scores of party workers who raised slogans in support of their leaders. Later, the duo left in a car to the venue of Divisional Meet.