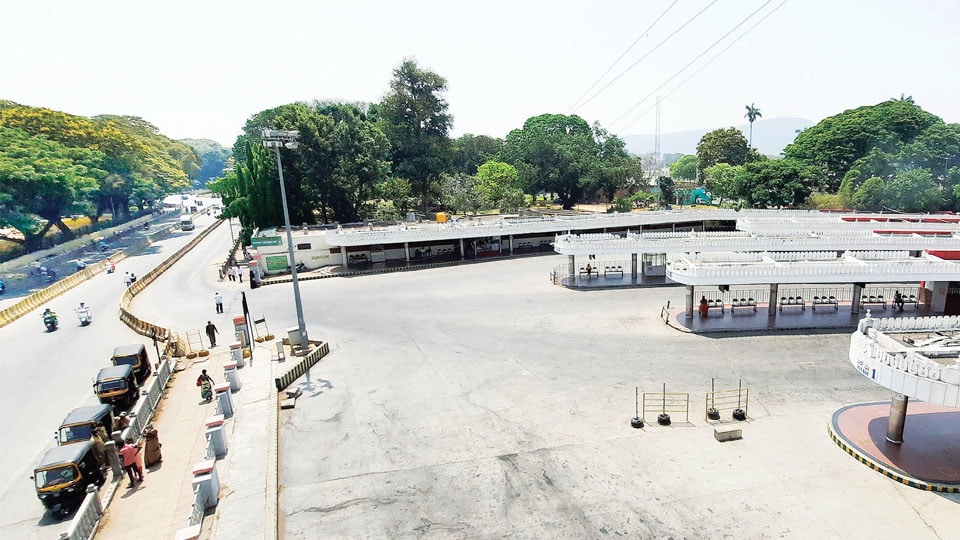 Mysore/Mysuru: The ever-bustling KSRTC Sub-Urban Bus Stand in city wore a completely different look with Private and Mini-buses dotting the bus stand, as the indefinite stir launched by KSRTC employees, seeking fulfilment of their nine-point charter of demands, including implementation of the recommendations of the Sixth Pay Commission, began this morning.

The strike was a total success in the city and district, with no KSRTC buses operating from the Sub-Urban and City Bus Stands since morning. While the KSRTC Sub-Urban Bus Stand  saw a beeline of Private buses and other public transport vehicles waiting  to pick up passengers, who were however less in number as compared to usual days, the City Bus Stand wore a completely deserted look, with no passengers nor buses.

Although the Transport Unions of all the four Road Transport Corporations of the State — KSRTC, BMTC, NEKRTC and NWKRTC — had called the indefinite strike from today, most of the KSRTC buses were off the roads from last evening itself, which severely inconvenienced the passengers.

As KSRTC staff failed to report for duty from yesterday evening, the KSRTC was forced to cancel many of its night schedules. With KSRTC services having stopped, Private buses lined up in front of the bus stand last night. This created confusion among the passengers, as they knew little about the destination of the buses and the fares. The authorities, taking note of the plight and inconvenience of passengers, allowed entry of Private buses, Cabs, Tempos and other Public Transport Vehicles inside the Sub-Urban Bus Stand after giving them only temporary permission to ply.

As the Transport Unions had announced their indefinite strike in advance, the number of passengers at the bus stand was far less than any other normal days. Private bus operators were given permission to operate on routes like Bengaluru, Madikeri, Chamarajanagar, Kollegal, Tumakuru, Mandya etc., starting from Sub-Urban Bus Stand.

However, taking advantage of the absence of KSRTC buses, private bus operators reportedly charged a higher fare citing reasons such as hike in diesel prices, rise in Insurance premiums and increase in prices of spare parts.

A majority of commuters were travellers to Bengaluru. Private buses, Taxis and Maxi-cabs were found charging up to Rs. 400 to Rs. 500 per head to Bengaluru, which is twice the normal fare.

As no city buses operated from the City Bus Stand, local commuters  were forced to take autos, cabs, taxis and other public transport vehicles to reach their destinations, which charged exorbitant fares taking advantage of the situation.

Meanwhile, KSRTC Rural Divisional Controller K.H. Srinivas told Star of Mysore that the authorities  have allowed Private bus operators to operate from the Sub-Urban Bus Stand, taking note of the plight of commuters and the inconvenience being caused to them in the absence of KSRTC buses.

Pointing out that the KSRTC authorities have been in touch with the staff and workers, he said that efforts are still going on to convince the staff to call of the indefinite strike and return to work.

He further said that the revenues of the Rural Division, which was just beginning to look up over the past few months following the relaxation of COVID-induced lockdown, will now take a hit once again due to the strike. The Division is expected to suffer a revenue loss of Rs. 60 lakh per day on account of the strike, he added.

With the Government rejecting their main demand of implementation of the recommendations of the Sixth Pay Commission, the Transport Unions have remained adamant on their stand and  said that they will not withdraw the strike, unless the Government honours the assurance that it had given when the workers had held a similar indefinite strike in December last.