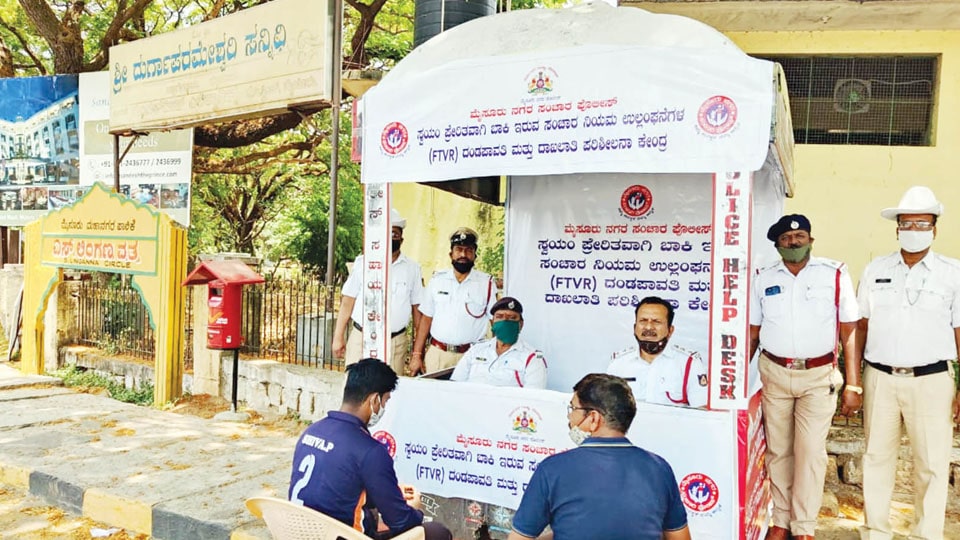 Mysore/Mysuru: Following several complaints about people-friendly Policing by Traffic Cops being misused by a majority of motorists, vehicle checking drive will recommence from next week, said DCP (Crime and Traffic) M.S. Geetha Prasanna.

It may be recalled, rampant checking of vehicles by Traffic Police was stopped after the Hinkal accident and assault on Cops by the public.

Speaking to media persons yesterday, the DCP said it had come to their notice that many people were found riding bikes and scooters without wearing helmet, triple riding and using mobile phones thus causing problems to law-abiding public. Besides, these riders were putting the lives of others at risk. Hence, checking drives would be re-started from next week, the DCP added.

She said there were plans to install new traffic signal lights at some places and added that a proposal to install new CCTV Cameras has been sent to MCC.

Continuing, DCP Geetha said that a people-friendly initiative by the Traffic Police took shape in city on Apr. 1 with the establishment of over 10 ‘Voluntary Checking Points’ at all Traffic Sub-Divisions where people could walk into the counter to check if there are any traffic violation cases booked on their vehicles and also pay traffic penalties on the spot. The kiosks were open between 10 am and 7 pm. From Apr. 1 to 5, many vehicle owners walked into these kiosks and got their vehicles checked for traffic offences and voluntarily paid the fines.

A total fine of Rs. 2,80,600 from 448 cases was collected in five days, the DCP said and added that a majority of motorists were voluntarily visiting the Traffic Police kiosks.

DCP Geetha Prasanna said that an additional five ‘Voluntary Checking Points’ have been opened at various places in the city bringing the total number of kiosks to 15 and added that traffic rules offences were also being captured on 56 CCTV Cameras installed at vantage points.