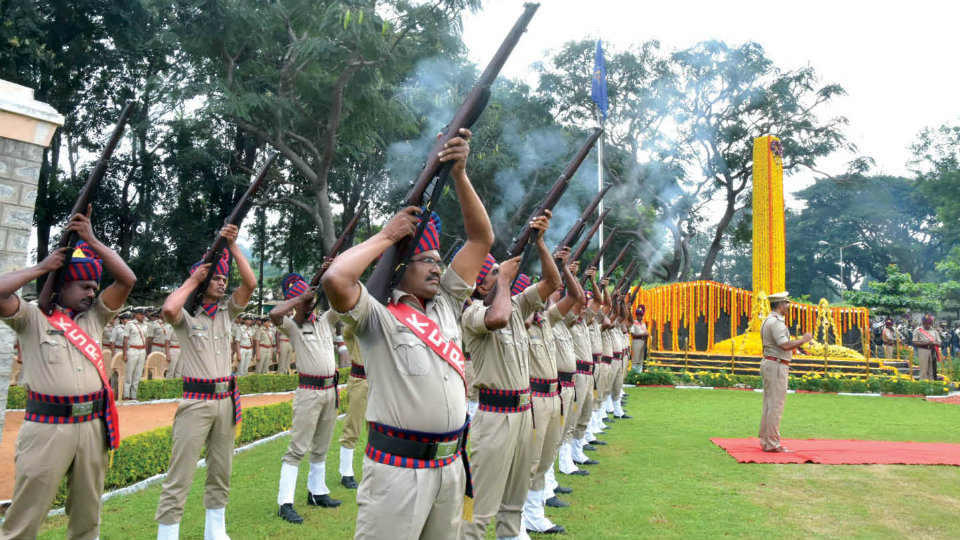 A tribute to fallen heroes

Mysuru: Observed on Oct. 21 every year, the Police Commemoration Day remembers the sacrifices of 10 Policemen who died in Chinese firing in 1959. Chinese troops opened fire and threw grenades at a party of 20 Police personnel. 10 were killed in the incident, which left seven others injured, who were later taken as prisoners.

Speaking as the chief guest, Chief Conservator of Forests (Mysuru Circle), T. Hiralal highlighted the services of Police Personnel in maintaining law and order, prevention and detection of crime, ensuring safety and security of citizens and guarding borders, Hiralal said that 292 Police personnel including 12 from Karnataka lost their lives while on duty.

Pointing out that over 35,000 cops were killed in the line of duty since independence, he said that the Police also play a key role during natural disasters risking their own lives.

“As per international standards, there should be 222 Policemen for every one lakh population. Although the present ratio is 132 Policemen, our Policemen have stood up to tasks efficiently in a most professional manner,” he said.

Recalling the joint efforts of the Police and the Forest Department in the killing of forest brigand Veerappan fifteen years ago, Hiralal underlined the co-operation of Police in Forest and wildlife conservation.

The twelve Police Martyrs from Karnataka who died in the line of duty from Sep.1, 2018 to Aug. 31, 2019 are Rachappa of Haveri, S.N. Purushotham of Hassan, Krishna Said Suragond of Bengaluru city, Y. Chandrappa of Bengaluru, K.K. Ananda of Chitradurga, D. Devakhate of Vijayapura, Mahesh Lamani of Mangaluru, Y.C. Ilager of Bagalkot, Shivaprakash Lootimath of Bengaluru, Veerappa Latti of Belagavi, H. Jagadeesh from Dakshina Kannada and Raju Elivala of Bengaluru.