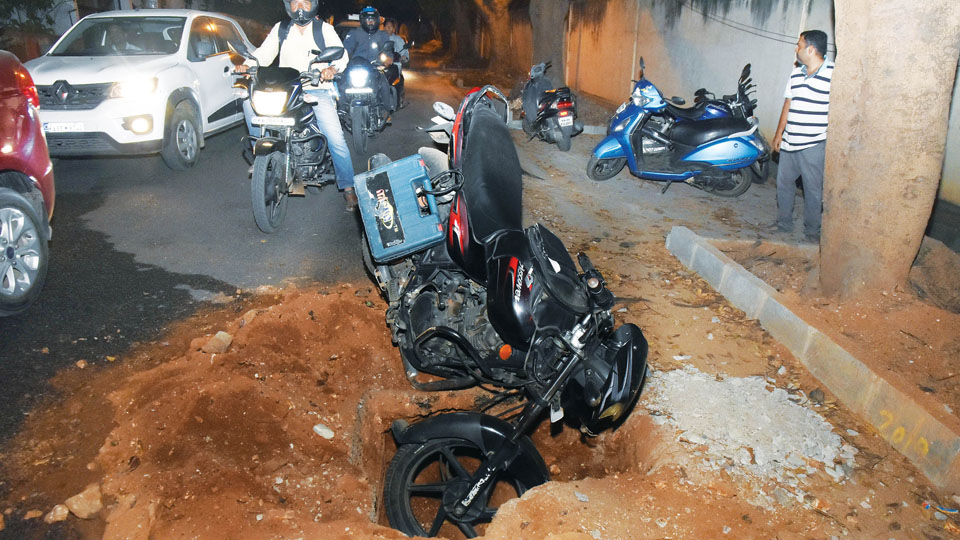 Mysuru/Mysore: The Mysuru City Corporation (MCC) had to wait for a victim to fall inside a gaping pit to crack the whip on Optical Fibre Cable laying firms who were  digging up the roads in a slipshod manner, violating the conditions laid down by the MCC while signing the cable work contract. Last night, a biker fell into an open pit in Yadavagiri and today, the MCC issued an order stopping all cable-digging works in city.

And fortunately, the biker, 32-yer-old Pradeep, who was returning home after a long day at work, is out of danger now and is recuperating at Columbia Asia Hospital and might have to undergo surgeries. The front tyre of Pradeep’s bike fell into the ditch that was carelessly or rather callously left open and his head banged on the road. Thankfully he was wearing a helmet. He still sustained head and leg injuries.

Enraged residents of Yadavagiri staged a flash protest against careless road digging, forcing the MCC to stop the work.

In the December 4, 2019 edition, Star of Mysore had highlighted the mess that has been created across the city by agencies attached to Reliance Jio Infocomm Ltd (RJIL), a private telecom company, for laying telecom fibre cables. The pits were dug at several places and were left open and in some places only mud was covered on the top with loose soil underneath.

After SOM expose series, Mayor Pushpalatha Jagannath and MCC Commissioner Gurudatta Hegde issued plain warnings to the telecom company and its digging agencies and imposed pittance as fines for shoddy works. But there was no one to care for public safety and Pradeep was destined to fall, thanks to sloppy works and ineffective monitoring.

Only at some places, the pits were closed, re-asphalted and chambers were created. But in many places, the pits were left open, indicating that the proper closure of the pits was just eyewash. Only after last night’s accident, workers scrambled to close some pits and after residents of Yadavagiri protested, reflecting plastic material (sign structures and barricades) were placed near the pits to warn motorists. Even Policemen joined the task of closing unfinished pits.

The diggers were using Horizontal Directional Drilling Method to lay cables where one to two foot square pits are dug. In all, 174.63 kilometres are being dug within the city limits to lay the cables.  The company has paid over Rs. 17 crore to the MCC as digging fees. Pits are being dug up at Yadavagiri, Hebbal, Vijayanagar, Sayyaji Rao Road and Nazarbad.

CESC cable pits make it worse: To make the matters worse, after the telecom company dug up the roads and closed the pits in some areas, CESC (Chamundeshwari Electricity Supply Corporation) again dug up the same road and both Reliance and CESC shifted the blame on each other. Worse, the MCC was a mute spectator.

In an order issued this morning, all the nine Zonal Assistant Commissioners and Development Officers were asked to immediately stop the digging work by CESC and the telecom company. Road diggers were directed to close all the pits that they have dug up first in a proper manner as specified by the MCC. Unless they finish closing the existing pits, they will not be allowed to dig further, MCC officers told SOM.

Taking immediate action, in some areas like the surroundings of Premier Studio (now demolished), MCC officers seized the digging materials and asked the telecom company to set right the damage that has already been done to the roads.

Slipshod works: The newly-laid Yadavagiri Road was a classic example where pits were dug from the Vontikoppal Circle up to Ideal Jawa Road and further on Kalidasa Road till the Chandrakala Hospital. Pits were closed in a haphazard manner. The manner in which the roads are being closed is dangerous when vehicles zip past, especially during peak hours when people are in a hurry to reach their destinations. While two-wheelers faced the risk of tripping and falling, four-wheelers faced the danger of colliding with oncoming vehicles while avoiding the mess. When the issue became a raging controversy, Executive Engineer of Jio Cable Pradeep told MCC that enough precautions were being taken not to put public life in danger. But sadly, the pits remained open and no one cared.