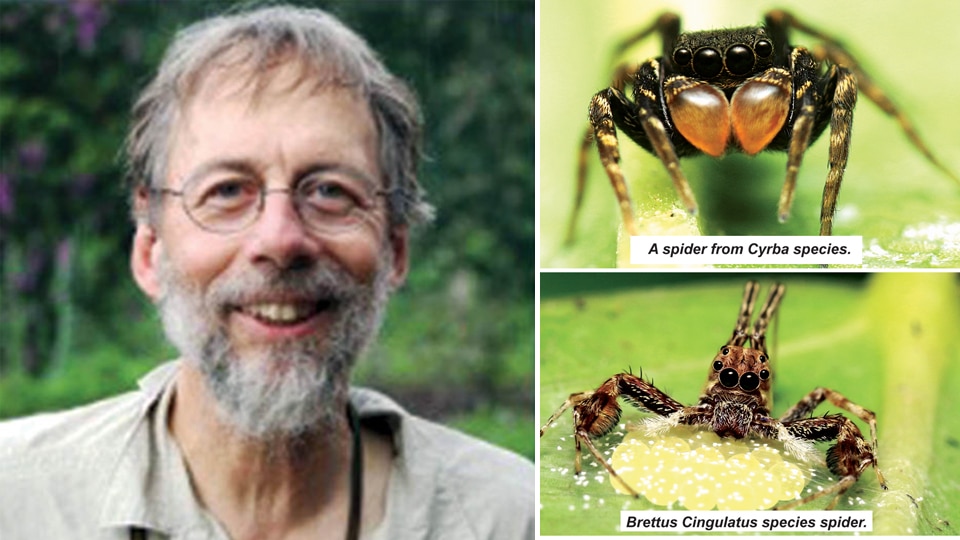 Mysuru: Team ‘Saaliga’ in association with Mysore Nature, Arivu Nature Resource Centre and Regional Museum of Natural History (RMNH), Siddarthanagr, Mysuru, is organising a talk on “The Music of Evolution: Exploring the Diversity of Jumping Spiders.”

The talk will be held on July 3 at 5.45 pm at Regional Museum of Natural History and will be delivered by Prof. Wayne Maddison, Professor and Canada Research Chair at the Department of Zoology and Botany, University of British Columbia. He is also the Founding Director of Beaty Biodiversity Museum.

Wayne Paul Maddison’s research arose from a fascination with the diversity of forms and behaviours of jumping spiders, which led to Systematics, Phylogenetic theory and computer programming. His work continues to be both empirical, on spiders, and theoretical, on the use of phylogeny in evolutionary inference.

According to Prof. Wayne Maddison, biologists are acutely aware that chance plays a major role in how evolution unfolds, so much so that we might question how well we can understand the general mechanisms of evolution.

“In my own life, chance introduced me to a jumping spider when I was a teenager, which led to a lifelong fascination and a career. Different species of jumping spider (there are thousands) exhibit different colours, body forms, ecological interactions, and behaviours, each the unique product of its evolutionary history,” he says.

When arrayed on the evolutionary tree, one can see that there are patterns: Some behaviours or colours evolve repeatedly and in similar ways, confirming that there are general rules, and not simply chaos and chance. In their chromosomes, there has been repeated evolution of X-autosome fusions that may have been driven by intralocus sexual conflict.

“We can thus see two levels of beauty: The beauty of the individual spiders and the beauty of the music of evolution — the melodies, harmonies and repetition across the grand scale of the ‘Tree of Life’. Scientists don’t often speak of beauty, but we must. We know it best, through our explorations, and if we can communicate the beauty of biodiversity to the public and policy makers, we can help motivate a change in how we all care for our planet,” he opines.