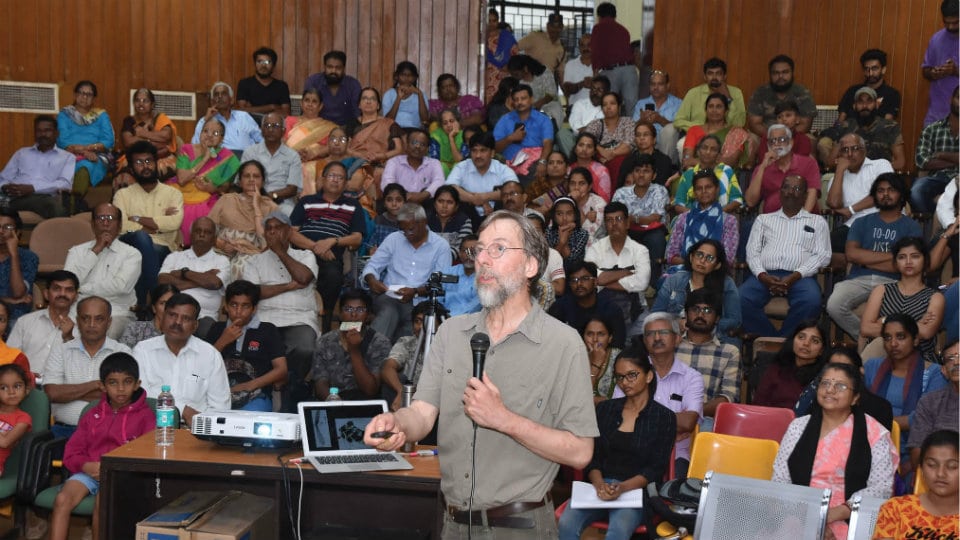 Mysuru: Stating that India has special and rare species of spiders, said Prof. Wayne Maddison, Professor and Canada Research Chair at the Department of Zoology and Botany, University of British Columbia. He stressed on the need for taking measures to conserve them as they were unique.

He was delivering a talk on ‘The music of evolution: Exploring the diversity of jumping spiders,’ organised by Team Saaliga in association with Mysore Nature and Arivu Nature Resource Centre at Regional Museum of Natural History (RMNH) at Siddarthanagar in the city yesterday.

Pointing out that spiders are wonderful creatures whose varied and complex range of behaviour and highly developed sensory systems are excellently adopted to the environmental conditions, Prof. Maddison said that his research arose from a fascination for the diversity of forms and behaviour of Jumping Spiders.

Noting that his work continues to be both empirical and theoretical on the use of phylogeny in evolutionary inference of spiders, he said that there are thousands of species of Jumping Spiders, exhibiting different colours, body forms, ecological interactions and behaviours, each being a unique product of its evolutionary history.

Emphasising on the need for a proper understanding of the general mechanisms of evolution, the Canadian Professor opined that it was important to communicate the beauty of biodiversity to the public and the policy makers.

Underlining the need for caring for our planet, Prof. Maddison said that Museums such as RMNH were important for the present and future generations to understand the need for preserving our biodiversity and for documenting research on wonderful creatures such as spiders.