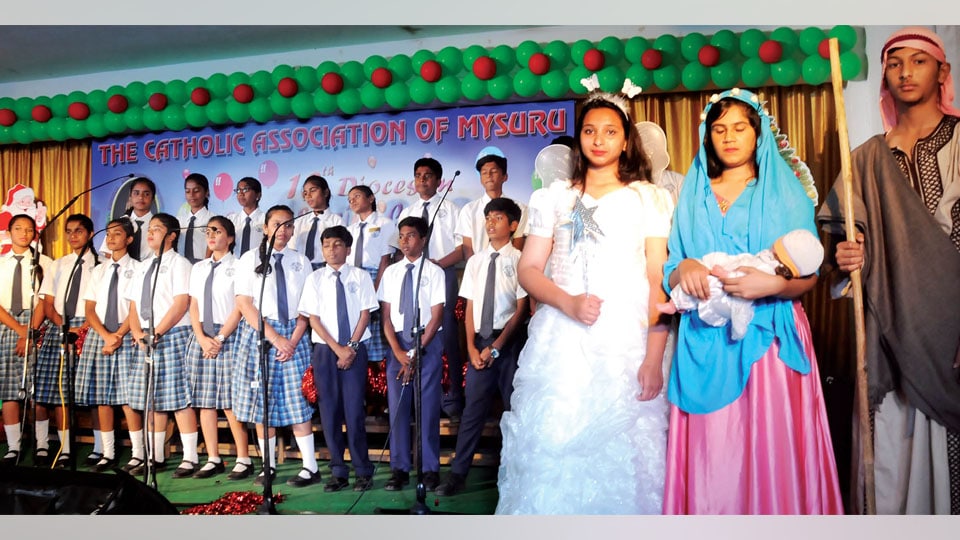 Bishop calls to spread message of love, brotherhood and peace

Mysuru: With hotels, restaurants in city preparing for the best Christmas cakes, Christmas season has already set in. Adding to festive spirit, the Catholic Association of Mysore had organised a carol singing competition at St. Philomena’s High School premises in city yesterday.

The competition was inaugurated by Bishop of Mysuru Rt. Rev. Fr. K.A. William in the presence of Primary and Secondary Education Minister Tanveer Sait and other dignitaries.

Various teams comprising students of high schools, colleges, religious organisations, choirs, professional singers and Churches from across the city and district participated in the Carol Singing Competition as singers put up a bright show at the event that commenced around 9.30 am. Some dressed in colourful costumes brought alive the birth scene of Jesus Christ. Carols including ‘Silent Night’, ‘Joy to the World’, ‘O come all ye faithful’ were sung at the contest.

Speaking on the occasion, Bishop William said that carol singing was an activity that helped bring down barriers

between people and added that human values were important and it seems that people have lost them.

Stating that the hearts had become like rock, the Bishop said that the people do not have the heart to listen to others which has to be overcome and added that competitions like carol singing brings everyone together.

He said that Christmas celebration was not restricted to one community, as all the people celebrate it and added that though many think that Christianity is a glorious religion, it is suffering right from the beginning.

Bishop William called upon the people to spread the message of love and peace  this Christmas.

Minister assures grants for St. Philomena’s Church: Minister Tanveer Sait, speaking on the occasion, assured to get additional funds for the renovation of the iconic Church of the city and added that the State Government has released a total of Rs. 5.5 crore for renovation of Churches in city.

Stating that the Bible teach us to love our neighbours as we love ourselves, Sait called upon everyone to spread the message of love and unity and also work hard to remove the  hurdles that is affecting human relationships.

He called upon the students and the community people to make use of various schemes of the Minority Department.