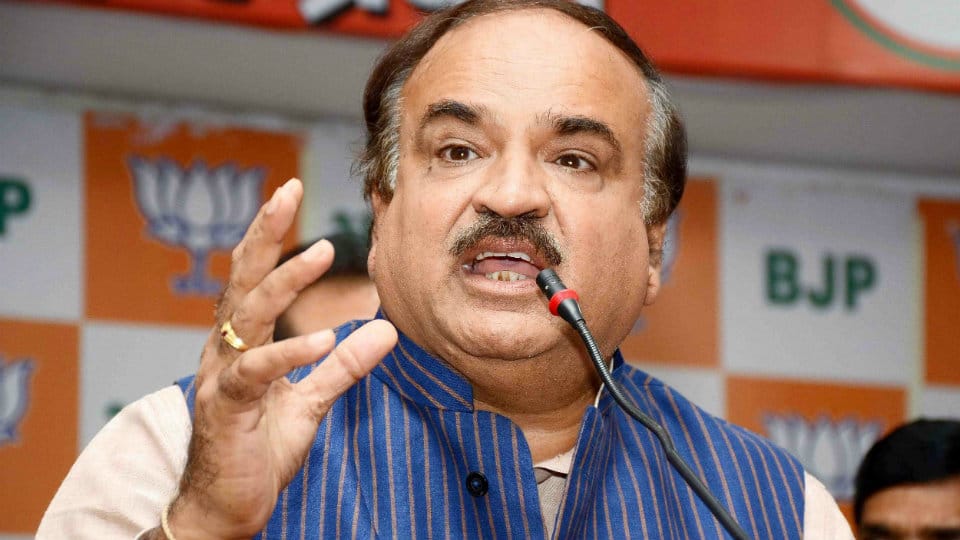 Mysuru: “BJP MPs will move a privilege motion against the State Government led by Chief Minister Siddharamaiah during the Winter Session of Parliament starting from Dec.15, for stopping the local MP from attending the Hanuma Jayanti function and taking him to custody in Hunsur,” said Union Parliamentary Affairs Minister Ananth Kumar here this morning. Addressing press persons at Government Guest House, he said that the State Government was following ‘Tughlaq Culture’ by hurting the religious sentiments of Hindus to please one particular community.

While permission was given to take out processions during Tipu Jayanti and Eid Meelad, the same was denied for Hanuma Jayanti, he added.

Ananth Kumar also said that CM’s ‘dictatorship’ was clearly evident with MP Pratap Simha not being allowed to take part in the procession and being kept in Police custody for nine-long hours during which he was taken around H.D. Kote, Najangud and T. Narasipur, before being released.

The Union Minister said that despite informing the SP, IGP and Home Secretary about Pratap Simha’s participation in the procession, the Police, instead of providing him security, took him to custody thus denying his right to participate in a religious event.

“This is not the first time that the Hanuma Jayanti procession is being carried out from Ranganatha Layout in Hunsur. The Police should have provided adequate security to continue the procession and celebrate the festival. Instead, they have used their lathis to disrupt peace to instigate communal conflicts,” said Ananth Kumar.

The senior BJP leader also took a dig at the State Government for failing to solve the alleged murder cases of 19 Hindu leaders including Raju in Mysuru and Mogali Ganesh in Husur. “The killing of Hindu leaders proves the presence of terror outfits in the State,” said Ananth Kumar.