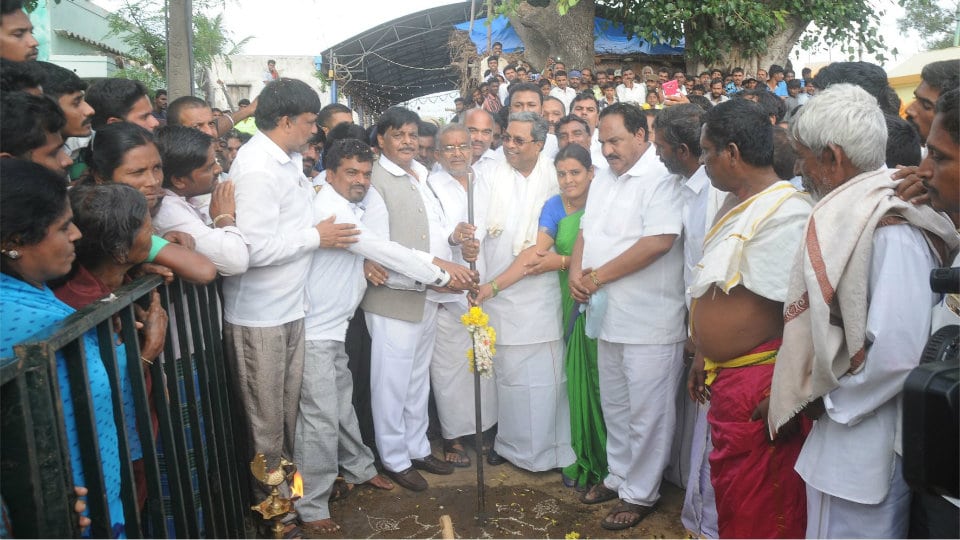 Mysuru: Performing Bhoomi Puja to a slew of development projects in Mysuru yesterday, Chief Minister Siddharamaiah gave enough hints that he would contest the next Assembly elections from Chamundeshwari constituency.

“Me and G.T. Devegowda were close associates once and we are still good friends. Don’t be surprised if we contest against each other from Chamundeshwari constituency in 2018,” Siddharamaiah said, leaving the audience in splits and at the same time conveying a message to the people that he will be there soon to seek votes.

He was speaking after setting in motion development works worth Rs. 20.82 crore at Udbur village in Jayapura hobli that comes under Chamundeshwari segment. Recalling his association with residents of Udbur, Siddharamaiah said that he expects the bond to be stronger in the next election too. “You have been blessing me and the people from my party and I will repose the same trust that you will bless me in the next election too,” he said.

When Siddharamaiah was asked what if Devegowda joins the Congress party, he said, let him come. “There are no permanent enemies or friends in politics,” he said.

Reacting to Siddharamaiah, G.T. Devegowda said that he would contest on a JD(S) ticket from Chamundeshwari constituency. “My family, including my wife and son, have been serving the constituency. I am not a Chief Minister to implement various programmes. There was a rumour that I would join the Congress party. But I will not leave the JD(S),” he said.

Recalling the by-election for Chamundeshwari in 2006, Siddharamaiah said that the constituency gave him political rebirth. I won the polls by a slender margin of just 247 votes, he said. Siddharamaiah said, “I am proud to state that I am in favour of Dalits, backward classes and the minorities. I am with the poor people, irrespective of community and caste. BJP leader Jagadish Shettar had called me ‘anti-Jalebi’, a sweet, which means anti-Brahmin, Lingayat and Vokkaliga, according to Shettar. But there are poor people in all communities. I am in favour of the poor,” he said.

Siddharamaiah’s intention of contesting from Chamundeshwari in 2018 is not new. It may be recalled here that last month, he had made his intention public. Notably, according to sources, Siddharamaiah is projecting his son Dr. Yathindra Siddharamaiah to be the Congress MLA candidate from Varuna.

“You (people of Chamundeshwari) have elected me MLA five times. And you gave me political rebirth in the 2006 by-elections. I am considering contesting again from Chamundeshwari. Due to my work pressure I have not been able to visit Varuna frequently. Earlier my older son Rakesh (who died last year) used to take care of work in Varuna. Now my younger son Yathindra has given up his profession to help me take care of the constituency. You must give your blessings to Yathindra,” Siddharamaiah had said.