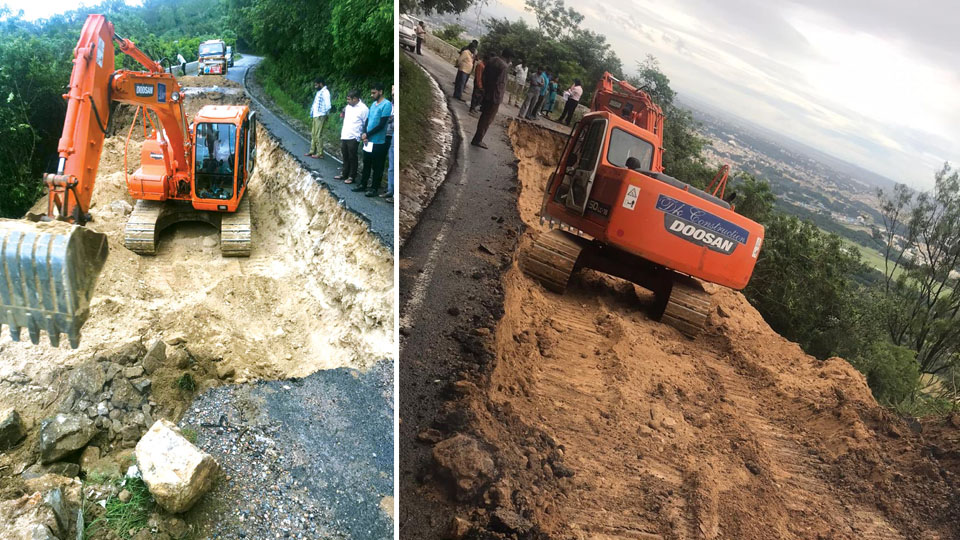 Mysore:  Following Tuesday’s landslide on a stretch of the Chamundi Hill road near Nandi statue atop the hill, works on the construction of a retaining wall at the spot began in full swing yesterday.

The PWD Officials who visited the spot on Tuesday evening, began the works in right ernest on Wednesday morning. The retaining wall is being built using concrete. With works having started, the PWD authorities have erected barricades around the spot for smooth execution of the works.

The landslide on Tuesday was measured as 50 ft. in length and 22 ft. deep. Backhoe machine was used to remove the mud and after the excavation works, iron pillars will be erected to support the concrete retaining wall. Also, the works are carried out for ensuring that storm water does not stagnate and flows smoothly.

With the works having started, the authorities have blocked the stretch from view point to Nandi statue for vehicular traffic and the vehicles have been asked to take the alternative route. Sign Boards are erected at both the points, advising the motorists to take alternative route.

PWD  Assistant Executive Engineer Raju said that with works going on at a brisk pace,the construction of the retaining wall at the stretch is expected to be completed in 15 days.