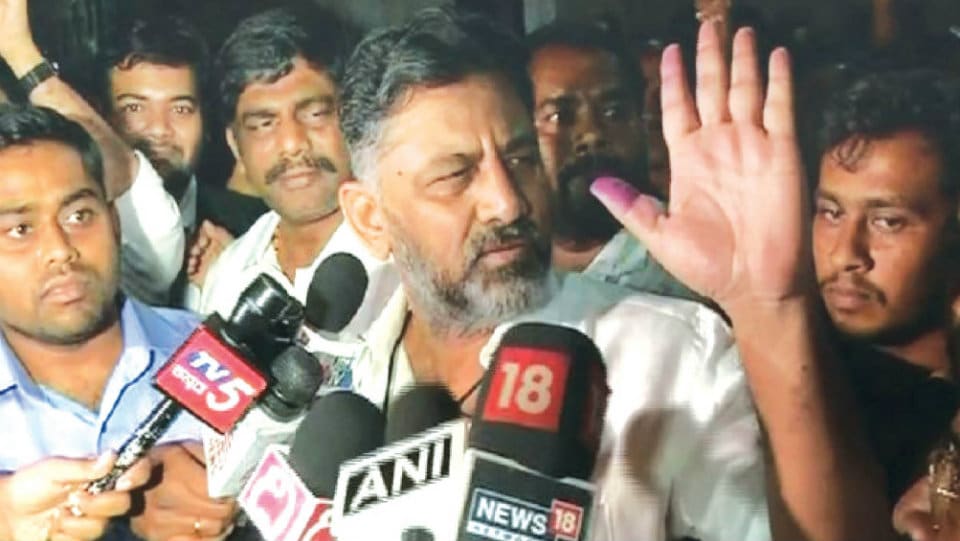 New Delhi:  Former Minister and MLA D.K. Shivakumar walked out of Tihar Jail following the bail granted by Delhi High Court yesterday. Shivakumar, who has been accused in a money laundering case by the Enforcement Directorate (ED), was kept in jail for nearly 50 days after trail Courts denied him bail. He was released at about 9.15 pm after the jail authorities received the Court orders.

“I have been granted bail. So with all your good wishes and with all the wishes of my party workers and supporters across the country, I’m back. I want to thank all of you for your kind support in the hour of crisis,” said Shivakumar soon after coming out of jail.

Congress party workers, who were waiting outside the jail, accorded a grand welcome to Shivakumar outside the jail. The former Minister along with his younger brother D.K. Suresh went to Shiva Temple on Malcha Marg and offered special pooja. Later, both went to Suresh’s residence.

Meanwhile, Congress party workers and D.K. Shivakumar’s supporters celebrated the release of their leader by bursting crackers and distributing sweets. The workers also offered special pujas at various temples across the town. There were also celebrations in front of Karnataka Pradesh Congress Committee (KPCC) office located on Queen’s Road in Bengaluru. Shivakumar’s supporters in Mysuru also celebrated his release by distributing sweets and offering special pujas at the temple.

While, granting bail to D.K. Shivakumar, Justice Suresh Kait referring to tampering of evidences said, “It is not in dispute that the documents relating to the present case are in the custody of the prosecuting agency, Government of India and the Court. Moreover, presently, the petitioner is not in power, except being a Member of the Legislative Assembly.”

The Court also noted that there was no evidence of the 57-year-old Congress leader, his family members or close associates attempting to influence witnesses. It ordered that Shivakumar be released on furnishing a bail bond of Rs. 25 lakh and two sureties of like amount. The Court has also barred Shivakumar from leaving the country without permission and has ordered him to make himself available for interrogation whenever required.

Relief to Shivakumar might not last long as Enforcement Directorate was planning to challenge the Delhi HC’s order in Supreme Court. Sources, also said that the Central Bureau of Investigation (CBI) was also reportedly getting ready to arrest him in its probe under the Prevention of Corruption Act.