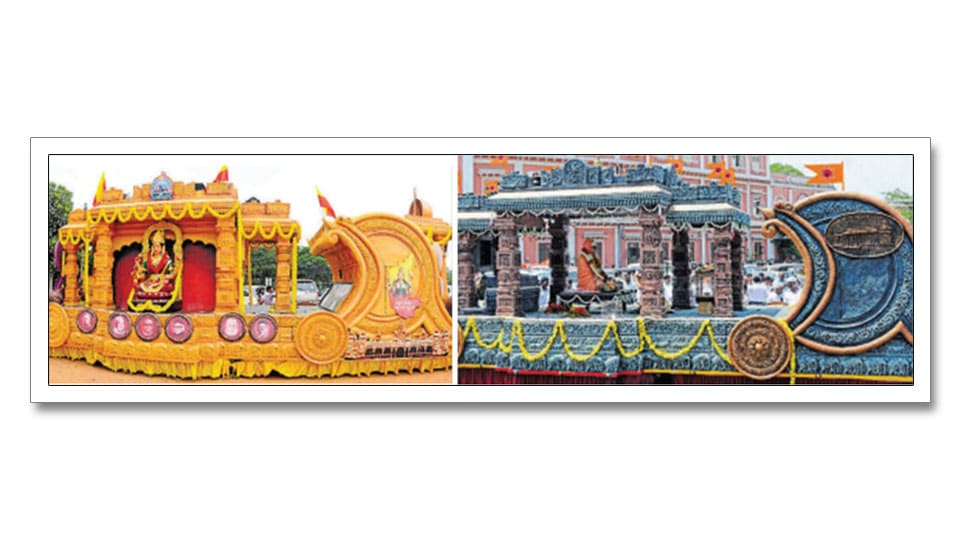 CHARIOT ROW: Artist says he was forced to refurbish old chariot due to fund & time crunch

Mysuru: Amidst allegations thick and thin about the gross misuse of money and blatant corruption hovering over the Kannada Sahitya Sammelana, here comes a shocker regarding the ‘Kannada Theru’ (chariot). The artist who designed the chariot has stated that he had indeed refurbished the chariot that was earlier used at a private function of a Mutt as he was forced to do so.

It may be recalled here that a section of Kannada activists had been alleging that the chariot, used as a publicity vehicle for the Sammelana, was not new but a remodelled one and lakhs of rupees have been gobbled up in the process. They had said that the same chariot was used for the centenary celebrations of Dr. Sri Shivarathri Rajendra Swamiji. The allegations were widely published in the media and following reports, Deputy Commissioner D. Randeep had issued a statement that funds will not be released if it is a duplicate chariot.

In a press release, Prakash Chikkapalya of Vismaya Prints, who designed the chariot, has admitted that the chariot was indeed remodelled after it was originally made for centenary celebrations of Suttur Seer Sri Shivarathri Rajendra Swamiji. He has stated that he was not suppressing facts and rather he was forced to remodel the chariot by the district authorities.

“My name has been unnecessarily dragged into the controversy. Yes. The chariot was redesigned and I had informed the authorities about this. They had approached me to design a publicity vehicle and told me that they had a shoe-string budget for the chariot and also did not have much time to build a new chariot,” he has stated.

Explaining further, Prakash, stated that he had told the officers who had approached him to make the chariot that as the budget and time were short, he could remodel the earlier chariot with minor changes and he already had the required raw materials and the chariot parts so that they can be redesigned.

“I had clearly told them that the chariot would be remodelled with necessary changes and additions to suit the Sammelana. And for this, the officers had agreed and had given me a go ahead. Redesigning was done as the time was too less and the budget was short too,” he stated.

Prakash, however, denied that money has been misused. “I have fulfilled my commitment as an artist and whoever has doubts on the expenditure incurred, I have maintained all accounts and I am ready to show it to anyone,” he added.