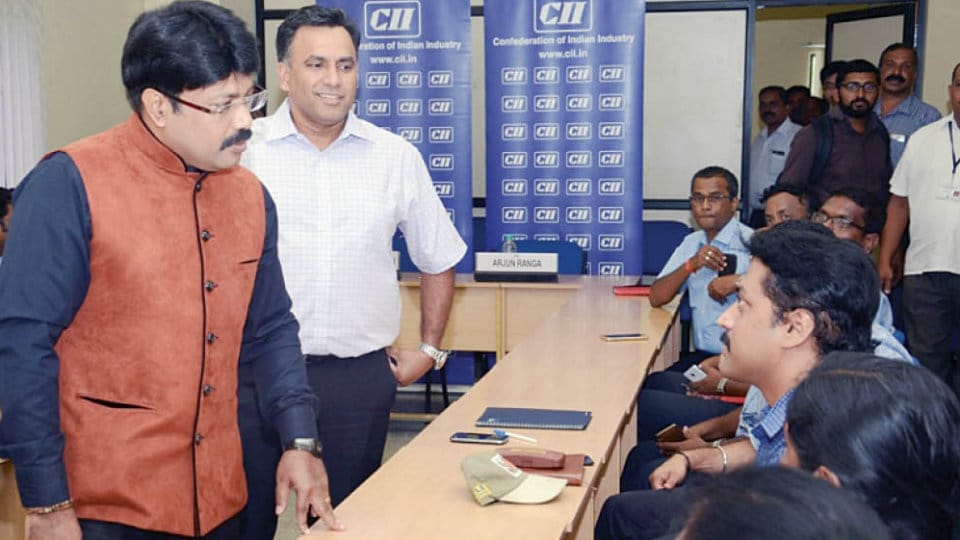 Here is good news for industrialists. If everything goes accordingly and the State government gives possession certificate — which is likely to be given in another 10 days’ time — the Container Corporation of India (CONCOR) will set up Inland Container Depot (ICD) between Kadakola and Thandavapura region in another 16 months’ time. The Depot will be  on the lines of one which already exists at Whitefield in Bengaluru. This was disclosed by Dr. Anup Dayanand Sadhu, Group General Manager, CONCOR, at an interaction session organised by CII Mysuru at SJCE-STEP in city last evening.

Interacting with the CII members and industrialists, he said: “As per revised plan, the depot will be set up in a 55-acre land at a cost of Rs. 100 crore. Once the depot becomes a reality it will be a big boost to industries. For Customs Duty, they need not go to Port; all formalities  will be done at the Depot and a separate office of Customs  will be set up.”

Apart from this, two Railway line, loading line and engine escape line will be set up which will be controlled by Kadakola Railway Station, he said and added that this would not only give a boost to exports from the region but the lead time taken to ship the containers to Port will also  be reduced thus saving costs apart from generating revenue for CONCOR.

At present most of the cargo meant for exports is sent to Chennai Port by road which adds to cost and time whereas the CONCOR facility at Kadakola in Nanjangud will provide a safer and more reliable alternative to road, Dr. Sadhu said.

He said that the bulk of the products that are exported from the region include general engineering products, coffee, electronic items and agro-based products. The IDC will have good warehouse facility which will be coming up in 1000 sq. mts.

“We will also provide door-to door-service. Hence I request industries to make use of the facility which will be a reality in 16 months’ time,” he added.

He also mentioned that CONCOR has purchased 55 acres  of land by negotiating Rs. 35 lakh per acre.

Arjun Ranga, Chairman, CII Mysuru, who also spoke, said: “Once the ICD becomes a reality at Kadakola it will be a big boost to industries. The completion of double track between Mysuru-Bengaluru will be an added advantage. With GST and ICD in place benefits could be multifold for industries as it will function as a single window agency providing Custom clearance and other facilities that are normally undertaken at the port.”

CII
No change in Second PU syllabus: Tanveer Sait
Kannada Sambhrama at Teresian: ‘Youths must come out of the shackles of social media’